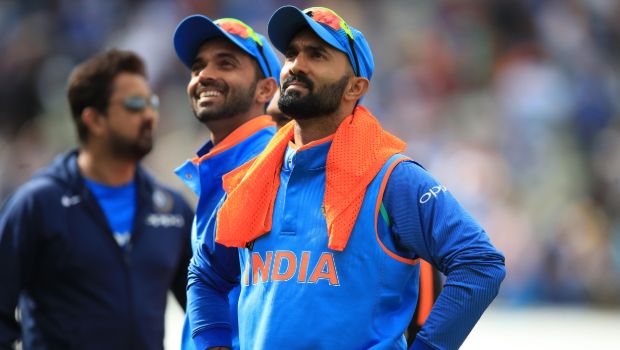 Despite still being a professional cricketer, Dinesh Karthik’s commentary career has taken off dramatically. He was admired by each and every one during the World Test Championship Final and is also part of the commentary panel for the Test series between India and England.

However, Karthik, who continues to play for Kolkata Knight Riders in the Indian Premier League and still hopes to return back to the Indian dressing room revealed something very interesting in a recent chat with Aakash Chopra on his YouTube channel.

He mentioned that he won’t play red-ball cricket for his state Tamil Nadu as he doesn’t see a future for himself there. Karthik also mentioned that he doesn’t want to block the chances of promising wicket-keeper batsman N Jagadeesan who has done well for Chennai Super Kings and is looking to make his Team India debut.

Despite this, the 36-year-old reiterated his dream to return back to the national squad and making a comeback in the limited-overs formats. During India’s last visit of England in 2018, Karthik had been a part of the Test squad.

He was utilized as a pure batsman in the first two Tests but failed to make an impression and was dropped for the team for good.

His last ODI appearance arrived in the tragic semi-final match against New Zealand in the 2019 World Cup. He last played for the national team in the shortest format of the sport against Australia in 2019. Since then, Karthik has only been seen primarily during the IPL.

Former Indian batsman Aakash Chopra also shared an interesting tale regarding Dinesh Karthik and MS Dhoni during India A’s tour of Kenya and Zimbabwe in 2004. Back then, Dhoni had bowled to Karthik in the nets despite the duo battling for the wicket-keeper spot in the national team.

“I want to take you back to the 2004 A tour of Kenya and Zimbabwe. MS Dhoni was also part of that tour and I distinctly remember Dhoni bowling to you (Karthik) in the nets.

Because he was my roommate, I told Dhoni ‘don’t bowl to him (Karthik), he is your competition. And if you want to bowl, at least bat.

What are you doing? He will play for India, he is almost there, sometimes you need to also play’. But Dhoni said, ‘no, no, I want to bowl’,” Chopra said on his Youtube channel.

Dinesh Karthik had no problems heaping praise on MS Dhoni, the man who kept him and Parthiv Patel out of the Indian squad for over a decade despite being promising talents. Karthik called the former Indian captain a once-in-a-generation cricketer.

“When Dhoni came in, he took the complete country by storm and I knew that door was closed. Keeper-batsman is always a decade-long job. Syed Kirmani was there, then Kiran More. Dhoni was a once-in-a-generation kind of a cricketer. Take Ian Healy or Adam Gilchrist, if you are a good keeper, you are there for 10-12 years.”