Home » Cricket » ENG vs IND 2021: Cheteshwar Pujara seems to be pushing at everything – Deep Dasgupta

ENG vs IND 2021: Cheteshwar Pujara seems to be pushing at everything – Deep Dasgupta 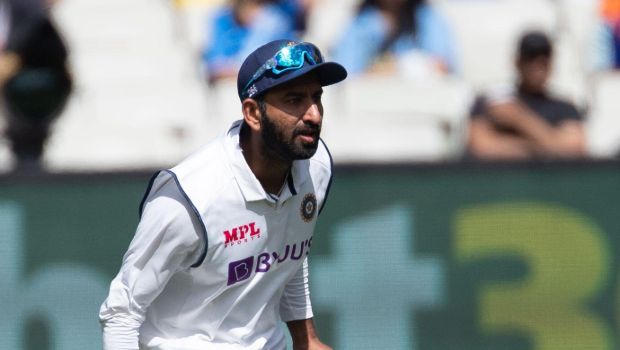 Pujara’s torrid form with the bat continued as he could only manage nine runs before he was dismissed by England’s veteran fast bowler James Anderson in the ongoing second Test match at Lord’s.

Pujara poked at a wide ball outside the off-stump, which took the bat’s edge and Jonny Bairstow took a sharp catch in the slips. India’s no.3 is struggling to get runs and looks out of sorts in the recent past.

In fact, Pujara’s last Test hundred came back in the Sydney Test against Australia in early January 2019 and since then the runs have dried up for him. Pujara hasn’t looked confident at the crease and the same has been palpable in his stroke-making.

Pujara’s feet are not getting close to the ball and he is playing away from the body to fall prey to the bowlers on a consistent basis. The right-hander was averaging below 30 in the first cycle of the World Test Championship. Furthermore, Pujara hasn’t crossed the 25-run mark in his last 10 Test innings as he is struggling with his form.

“He (Cheteshwar Pujara) seems to be pushing at everything. And that’s not him. I mean, at his peak as well, he wasn’t striking at a very high rate. The strike rate is not his issue. But, it seems that he is thinking about it. And that’s where he is getting into this really, really bad place now. And not just that, there was just one delivery where there was a dead defence. Apart from that, everything else, there was a push from him, and that’s just not him,” Dasgupta said on BBC’s Test Match Special.

Pujara is well known to play with soft hands and it has always played a key role in his success. However, India’s no. 3 is struggling to time the ball these days.

“If you look at Pujara and when he is batting really well, you would see soft hands and even if you see those edges, chances are that they won’t carry to the slip. But right through the innings, small as it was, it seemed like he was pushing at almost everything.”

Deep Dasgupta added that Pujara is trying to bat like someone else and he is not backing himself. The right-hander hasn’t looked confident during his stay at the crease.

“He is trying to bat like someone else. He has played 87 Test matches the way he has so far. And suddenly after 87 Test matches, it’s very difficult to teach an old hag a new trick. And that’s what he is trying to do and that’s a concern for me. Let’s just leave him alone, the way he bats. If he is not getting runs, that’s an issue, not his strike rate.”