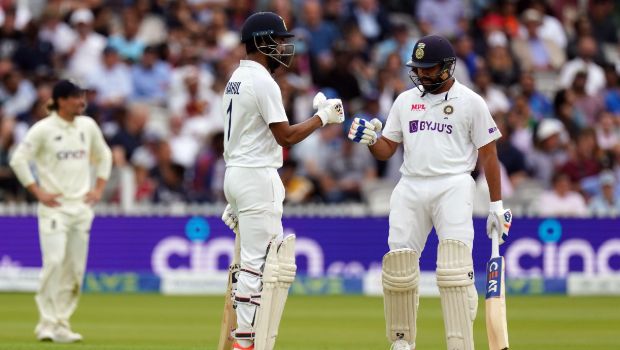 India’s batting coach Vikram Rathour has admitted that opening batsman Rohit Sharma needs to be more selective in his shot selection whereas there are no issues with Virat Kohli.

Rohit was dismissed while trying to hook the ball even before India could take the lead in the second innings.

Rohit was able to get a six while pulling against Mark Wood but once again went for the hook shot despite three fielders positioned on the leg-side for that particular shot. The right-hander holed out to Moeen Ali, at deep square leg and it was a big wicket for England as Rohit has been in fine form.

Rohit had recently said that he will keep playing the pull and hook shot as it has fetched him runs in the past. Meanwhile, it was noticed that Rohit was successful in pulling but has been dismissed while playing the hook shot twice in the ongoing series.

On the other hand, Sam Curran was able to set up Virat Kohli with guile. Curran bowled two inswingers and then got the ball to move away from the right-hander. Kohli once again reached out to the ball, which was on the sixth stump line. The Indian captain was dismissed while meddling with an outside off-stump delivery, which he could have left easily.

“There will be analysis, of course every-time they get out, we will be having a talk, what happened and what they were thinking while batting or while they played that shot. As far Rohit is concerned, I think he has made it clear that that is the shot which fetches him runs, that is the shot where he gets runs with, so he is going to play those shots and we are backing him to play those shots, only thing he needs to do is to be a little-more selective, with what to play and when to play…” Vikram Rathour said in a virtual press conference.

“Kohli, I don’t think there was any issue, it was just a lapse in concentration today, where his bat went to the ball, which he shouldn’t have played and nothing more, I don’t think anything old (is) coming back,” the batting coach added.

On the other hand, Rathour believes if India can take a lead of more than 200 runs, then it would be difficult for England. India currently has a lead of 154 runs with four wickets in hand and the onus will be on Rishabh Pant to provide crucial runs for the team.

“You are right, this will be a typical fifth day wicket of a Test match, where the ball will go up and down and is also turning, like we saw. So, again like I said earlier, if we can take the target near 200 runs, then it won’t be easy for England,” Vikram Rathour concluded.