Home » Cricket » ENG vs IND 2021: Tension in the field in our second innings helped us – Virat Kohli

ENG vs IND 2021: Tension in the field in our second innings helped us – Virat Kohli 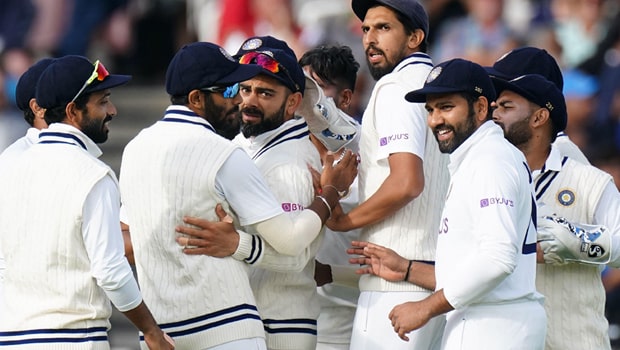 Indian captain Virat Kohli admitted that the tension between the two teams helped in motivating them to go for the win. The Virat Kohli-led team registered a memorable win at Lord’s as they won by a massive margin of 151 runs to take a 1-0 lead in the series against England.

Coming into the final day, not many expected that India would go on to win the Lord’s Test but the visitors came up with an inspiring performance. England were able to get the early wicket of Rishabh Pant and Ishant Sharma and the hosts decided to take their vengeance against Jasprit Bumrah, who had troubled James Anderson in the first innings.

However, England veered off the track as they were more focussed on verbal battles than following a plan to dismiss Bumrah and Shami. Joe Root also came up with bizarre captaincy as he had his field spread despite India being on the backfoot. What followed was a fairytale as Shami scored his second Test fifty whereas Bumrah scored his highest Test score of 34 runs.

The duo added an unbeaten alliance of 89 runs and helped their team post a total of 298 runs and thus India were able to take a lead of 272 runs. Subsequently, the bowling unit was fired up to give it back to the hosts and Bumrah and Shami were able to strike in their respective maiden overs.

Virat Kohli said in the post-match presentation, “Super proud of the whole team. The way we stuck to our plans after being put in. The pitch didn’t offer much in the first three days. First day was the most challenging. The way we played in the second innings after being put under pressure – Jasprit and Shami were outstanding. We had the belief we can get them out in 60 overs”.

“The tension in the field in our second innings, what happened there, helped us. Putting their hand up was something we were really proud of and we wanted to let them know (ovation for Bumrah-Shami). Batting coach has worked really hard with the boys. When we were No.1 we were getting runs from the lower-order. Then we shied away from it. But now they (lower-order) have the desire in them to get the runs and do well for the team. We know how priceless those runs are. Have been a part of the winning Test last time under MS. That was pretty special. But this one, to get a result in 60 overs is quite special”.

“And especially with someone like Siraj playing for the first time at Lord’s and he bowled superbly. We decided 60 is our mark. Crucial breakthroughs with the new ball was the right start for us. Very happy with the support we got, especially when we’re playing away from home these things are very important. It comes a day later (after Independence Day) but it’s the best gift we can give. We’re not going to sit on our laurels after this match, five Test matches is our focus. Today that one was purely gut feel (the Robinson LBW review). I get many wrong, but if you don’t take a chance you never know”.

Virat Kohli is known to take the bull by its horns and he was charged up to give it back to England when the Indian team came out to bowl. It was a collective team effort from the tourists as Rahane and Pujara had also delivered on the penultimate day and the fast bowlers stood up to the challenge on the final day.