Home » Cricket » ENG vs IND 2021: They are so far on the front foot – Sunil Gavaskar backs Indian batsmen to play on back foot

ENG vs IND 2021: They are so far on the front foot – Sunil Gavaskar backs Indian batsmen to play on back foot 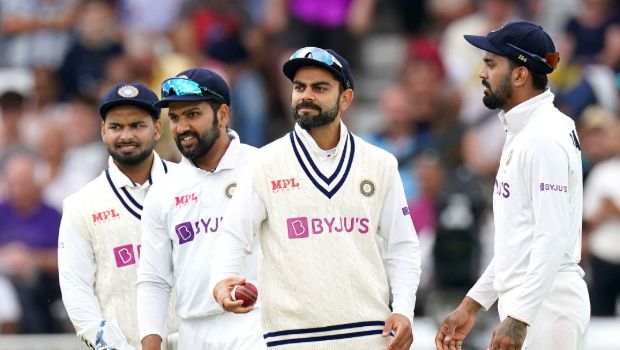 Indian great Sunil Gavaskar feels the Indian batsmen are playing a lot on the front foot and they are having difficulties leaving the ball as they are committed to the front foot.

The Little Master believes the Indian batsmen can leave the ball with ease if they play on the back foot.

The Oval pitch had extra bounce and swing on an opening day and it was not easy for the batsmen to get going. Rohit Sharma was dismissed on a short-pitched ball as he got an outside edge.

The England bowlers were once again able to consistently bowl in the right channel and the Indian batsmen were not sure whether to play or leave the ball. In fact, six Indian dismissals came off edges as they were once again not at their best.

“You see the length that is being bowled and see where the batsmen are playing. They are so far committed to the front foot, it’s very difficult for them to drop their bats.

They just tend to sort of go for it. If you’re on the backfoot just that little bit, you have that nanosecond to drop your wrists and let the ball go.”

Gavaskar added that the batsmen might look like an idiot but most importantly they would still be batting if they play on the back foot.

It has been noticed that Joe Root and Haseeb Hameed had savored success in the third Test while playing on the backfoot. In fact, Indian batsmen’s striking points (where they were meeting the ball) were way forward as compared to England’s batsmen.

“You may look like an idiot but you’d still be batting. Whether you look like an idiot or look great, doesn’t go down in the scorebooks. It’s the number of runs you score. When you follow the ball like (Cheteshwar) Pujara has been doing – he is committed to the front foot – you get yourself into trouble.”

Indian batting has struggled to get going in the ongoing series and once again they were bowled out for a paltry score of 191 runs after Joe Root decided to bowl first on a cloudy morning.

However, the Indian batsmen have failed to show resistance and they might need to tweak their technique in the tough English conditions. Shardul Thakur was able to save India from some shame as he scored a quickfire knock of 57 to get his team to a total of 191 runs.