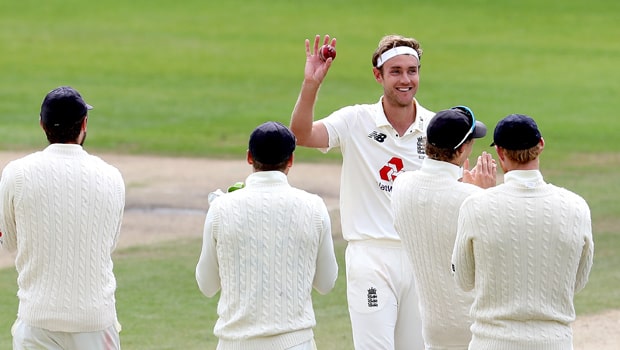 England won the three-match Test series by 2-1 against the West Indies at Old Trafford, Manchester as they clinched the final match by a mammoth margin of 269 runs and thus regained the Wisden Trophy, which will be retired now. The hosts needed eight wickets in the final two days and with the penultimate day getting completely washed out, they had to take all of them on the final day.

England got off to a perfect start after Stuart Broad scalped his 500th wicket when he plumbed Kraigg Brathwaite with the grubber. Broad didn’t take long to get to the landmark and became the fourth fast bowler as well as the seventh overall to take 500 Test wickets. The lanky pacer was full of smiles after getting to the much-deserved milestone.

Shai Hope looked in good touch and did all the hard work before gifting his wicket when he tried to play a reckless shot against Woakes but could only find Broad, who took a good catch.

Shamarh Brooks got an inside edge to Buttler against Woakes and it was not for the first time in the series when he was dismissed in this manner.

However, continuous showers at Manchester kept delaying the inevitable England’s win as the players took early lunch. After the break, England struck again as Dom Bess produced an absolute fine effort in the field after hitting the bullseye, off-balance, to run-out Roston Chase.

One ball later, another shower interrupted the proceedings but soon after the break, Woakes trapped Jason Holder in front of the wickets. Woakes was on a roll and then he scalped two wickets in an over, removing Shane Dowrich and Rahkeem Cornwall through LBW. The fast bowler also completed his fourth five-wicket haul of his career as he got the ball to move into the right-handers.

The wickets kept tumbling at regular intervals as no visiting batsman was able to show any gumption. When Stuart Broad took his 10th wicket of the match when Jermaine Blackwood gloved the ball down the leg-side with Jos Buttler taking the catch, it was all over.

It was a fine resumption for the game as all the three Test matches went into the final day’s play and were a perfect exhibition of the game. Both the teams fought tooth and nail but England were the better side in the final two Test matches and thus claimed the series.