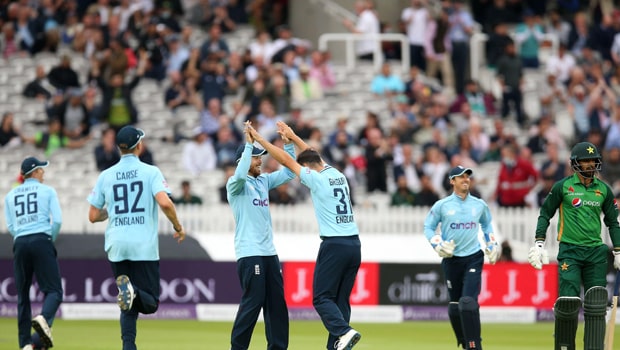 England beat Pakistan by three wickets on Tuesday which saw them win the one-day international series 3-0, having won the two previous outings. England ended the match 332-7 with 48 overs while Pakistan finished with 331-9 and 50 over.

Tuesday’s win was largely contributed by James Vince, who played 102 from 95 balls. This was his first international century and it was truly remarkable as it helped the hosts have a flawless victory over Pakistan. Lewis Gregory also helped with 77 from 69.

The tourists also played good games. Babar Azam made a stunning 158 from 139 while Mohammed Rizwan made 74 from 58. Both men helped to set Pakistan off on a good start. This did not, however, give them victory, thanks to the disruption from Vince and Gregory. Both men fell to Haris Rauf, not before causing enough damage though. Their good work was completed by Craig Overton and Brydon Carse, two inexperienced players in their first ODI. Captain Ben Stokes also made some impact, with 32 from 28, before he was dismissed by Shadab Khan.

This win is quite special because England did not use its first squad after a covid infection broke out at the camp last week, affecting some players. The only reason why Stokes was on this squad was that he was away recovering from a broken finger. Still, despite the lack of big names, England proved itself by not just winning one but all three matches in the ODI series. Many of the people on this squad, like Gregory and Carse, were playing their first ODI series and they did amazingly well. This goes to show just how strong the English squad can be.

Both sides would face each other in a three-match Twenty20 series starting this Friday. It is not sure if England would field this same squad or have some members of its first XI back on the pitch.