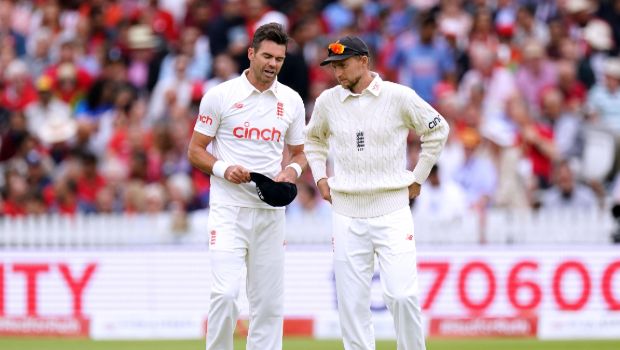 Former Indian great Sunil Gavaskar has predicted that India should win the remaining three Test matches as he reckons that England is a two-man team.

The Little Master feels the hosts are dependent on Joe Root in the batting department whereas they are heavily reliant on the shoulders of James Anderson after India won the second Test by 151 runs.

England’s veteran fast bowler Stuart Broad has been ruled out of the entire series due to calf tear. Meanwhile, England’s batting hasn’t been up to the mark as the remaining batsmen are not able to support Joe Root, who has been a lone warrior for the team.

Root has amassed 386 runs in two Test matches but the second best England batsman, Jonny Bairstow has scored only 118 runs. On the other hand, James Anderson and Ollie Robinson have scalped nine wickets each but the hosts have failed to come up with a collective team performance in the ongoing series.

In fact, Sunil Gavaskar had earlier predicted that India will win the series by 4-0 or 3-1 against England. The tourists had also dominated the first Test match but could not go on to win it as rain played spoilsport.

“England is a two-man team. It’s just Joe Root and Jimmy Anderson. With the greatest of respect to all who are playing there, it doesn’t look like a proper Test team,” Gavaskar said on Sony Sports Network on Monday.

“Their technique is awful. The technique of their opening batsmen is ludicrous. Their No.3 batsman Haseeb Hameed is nervous, tentative. So, we look up to Joe Root. Jonny Bairstow, yes if he gets going or otherwise it’s nothing. Buttler is a fine white-ball player. I’m not too sure he is there for red-ball cricket,” Gavaskar said.

Gavaskar feels England’s bowling is also not up to the mark as James Anderson and Ollie Robinson have only impressed.

“In bowling, there was just Jimmy Anderson and there was nobody else. Robinson got five wickets in Trent Bridge but it’s really a ‘two and a half men’ kind of a team,” he said.

“That’s why I think India will win the remaining three matches of the series. I had said at the beginning of the series that India should win it 4-0 or 3-1 and I still believe that result is possible if rain doesn’t spoilsport.”