Getting Dhoni, Kohli and De Villiers clean bowled one of my big achievements – Rashid Khan 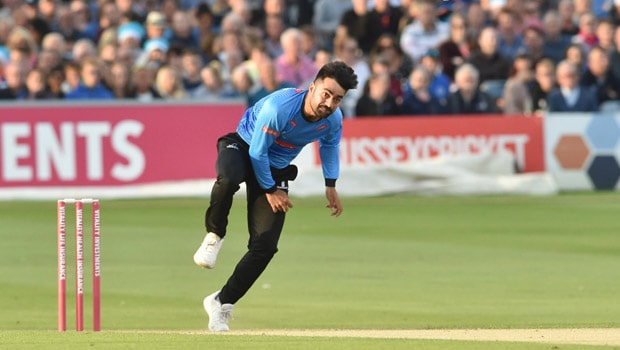 Afghanistan and Sunrisers Hyderabad talisman spinner Rashid Khan has rated getting the wickets of MS Dhoni, Virat Kohli and AB de Villiers in the IPL as one of the biggest achievements of his career. Khan, who is known to bamboozle the batsmen with his variations and quick arm action, has clean bowled these three big players in the IPL.

Rashid added that it feels extra special to clean bowled these big players as a spinner and it is much easier to get them caught or dismissed through any other mode of dismissal.

Rashid is currently in Abu Dhabi as he will represent Lahore Qalandars in the remainder of the Pakistan Super League.

Rashid said while talking to Cricwick, “There are a lot of memorable wickets to be honest. But if you ask me, my best three wickets in T20s, then they have to be MS Dhoni, Virat Kohli and AB de Villiers. I had bowled all three of them. Taking wickets is fine, sometimes you get people out caught and other times you get them out lbw or like that. But, getting such legends out bowled, I would say is a big achievement. Because, to get those three names bowled is a tough job as a spinner. Those wickets, I will always have in my mind and remember them forever.”

On the other hand, Rashid added that he would have liked to bowl at Sachin Tendulkar. In fact, the Master Blaster was not dismissed by a leg-spinner in the last 13 years of his career. Tendulkar also dominated Australia’s legendary spinner Shane Warne during his heydays.

“That is why I want to bowl to him, because he hardly used to get out to leg spin. More than getting him out, it would be a huge pleasure to bowl to someone like Sachin Tendulkar. Getting him out or not out is a different thing, just bowling to him would be like a dream come true.”

Rashid added that he likes to do his homework on what kind of balls he should bowl to a particular batsman according to his strengths and weaknesses.

“Definitely, as a spinner, you have an idea of the kind of deliveries you need to bowl to a particular batsman, because everyone doesn’t play the ball the same way. Every batsman plays my leg-spin differently. So I would need to study really hard how and where to bowl to him. Still, it would be a huge pleasure bowling to him. In 2015, I bowled a few balls to Inzamam-ul-Haq and troubled him a bit. Bowling to legends is a huge moment.”