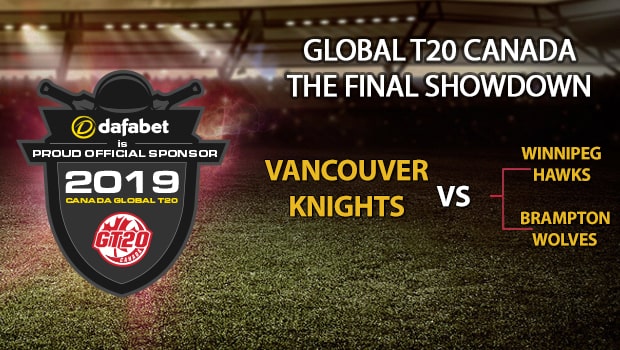 Preview: The Vancouver Knights will take on the winners of the second qualifier between the Winnipeg Hawks and Brampton Wolves in the Grand Finale of the second edition of the Global T20 League on Sunday.

Vancouver have really justified their tag of defending champions with a superlative performance in this edition. They had a shaky start to their campaign. After winning their first match against Toronto comprehensively, they lost their second match and the third match was abandoned as well. So, they faced a tricky situation having scored just three points in their first three matches. However, they turned things around with back-to-back victories in the next couple of matches and another abandoned game helped them to qualify for the playoffs as the second-placed team with eight points.

They were up against Global T20 Canada league leaders Brampton Wolves in the first qualifier of the playoffs and they had the mental edge and confidence in this match as they had already beaten them once during the league stage. And they piled on the pressure once again as they posted a daunting total of 170/4 in a match reduced to 16-over per side. The target was revised to 181 for the Wolves but the Vancouver bowlers made a mockery out of the Wolves’ batsmen once again as they bowled them out for a paltry total of 103 runs. That helped Vancouver to storm into the final without any fuss and they look all set to defend their title once again.

Now it remains to be seen who their opponents are going to be. Brampton have been the better team in this tournament overall whereas Winnipeg have come up with some breathtaking performances as well, despite disappointing on other occasions. Recent form, though, is in Winnipeg’s favour but a strong side like Brampton can’t be ruled out as well. Moreover, the Hawks got the better of Vancouver in the Canada T20 league stage as well. So, they will have the mental edge in the final if they are able to get past the Wolves in the second qualifier.

Chadwick Walton: The No 3 batsman has played an instrumental role in Vancouver’s success this season. He has been their steadying force with 197 runs at an average of 49.25, which include two fifties as well.

Rassie van der Dussen: The South African batsman has been in great form as well and he is the second highest run-getter for Vancouver at the moment. He has scored 185 runs in four matches and, that too, at an excellent average of 61.67 and an equally impressive strike-rate of 172.90.