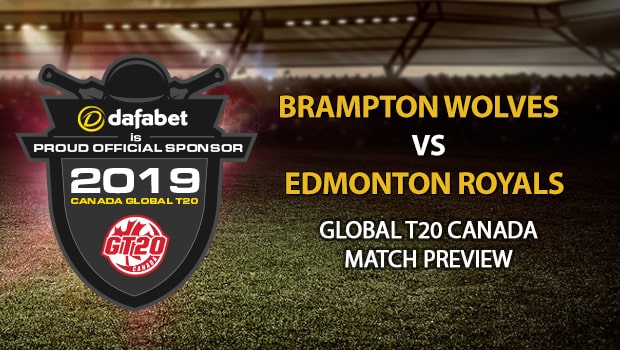 Preview: The Brampton Wolves will look to get back into their winning momentum whereas the Edmonton Royals would be eager to bow out of the tournament on a positive note as the two sides lock horns with each other in the 16th match of the tournament at the CAA Centre in Brampton on Tuesday.

The two teams are coming into this match on the back of contrasting results in their respective previous matches. While the Wolves suffered their first loss of the season in the previous match to the Vancouver Knights, the Royals notched up their first victory of this edition as they defeated the Winnipeg Hawks by a comprehensive margin of eight wickets.

The loss, however, hasn’t had an effect on their position in the points table. They are still sitting pretty at the top of the ladder with eight points in five matches and a net run rate, which is almost impossible for any team to match at this stage. The Royals, on the other hand, are lurking right at the bottom of the table even after the victory in the previous match. Another win in their last match of the season could save them from the blushes of finishing last but that depends on other results to go their way once again.

The Wolves had been flawless in their performance throughout the tournament until that blip in the previous match. And they would hardly repeat the same mistake again considering the way they have performed so far. Hence, it won’t be easy for the Royals to get the better of the wounded Wolves. In fact, they would be more ferocious in this encounter as compared to their previous matches. Moreover, the Wolves have the mental edge going into this encounter also as they had beaten the Royals by 27 runs during their previous meeting. So, the Royals need to be well aware of that.

Lendl Simmons: The Caribbean opener has consistently gotten the Wolves off to steady starts. He is the fourth highest run-getter in the tournament as of now with 167 runs to his name at an average of 41.75 and a strike-rate of 157.54.

Shahid Afridi: He was rested in the last match but can be expected to return in this match. The Royals should be wary of him as he had smashed 81 off just 40 deliveries the last time they met in this edition. He had picked up a wicket as well. So, he possesses an all-round threat to the Royals.

Ben Cutting: The Australian all-rounder has been in fabulous all-round form for the Royals. Along with scoring 117 runs at an average of 39 with the bat, Cutting has also accounted for eight valuable wickets for his side.

Shadab Khan: The Pakistani leg-spinner is their highest wicket-taker with nine scalps to his name this season. Apart from that, he has also contributed 68 runs down the order at an average of 17 and a strike-rate of 158.13.