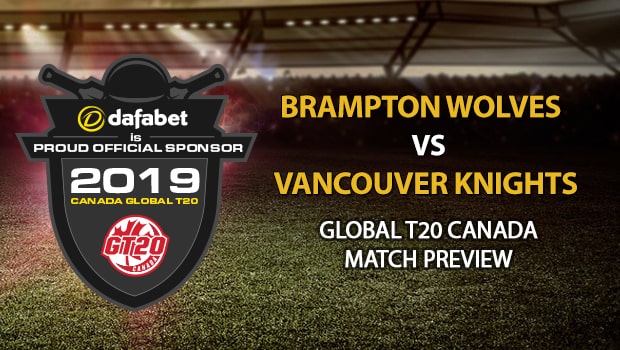 Preview: The Brampton Wolves will take on the Vancouver Knights in the first qualifier of the tournament at the CAA Centre in Brampton on Thursday.

It has been a stellar debut season for Brampton. Teams generally take time to settle down to a GT20 Canada league of this stature but Brampton started off well and continued with that momentum throughout the tournament. They topped the league as they finished with nine points from six matches. The Wolves won their first four matches and suffered their first loss of the tournament only in their fifth game against the Vancouver Knights. They were scheduled to play the Edmonton Royals in their last league game but that was washed out by rain. Nevertheless, Brampton hardly have any reason to complain and were almost flawless throughout the entire duration of the league stage.

The defending Champions, Vancouver, on the other hand, had a mixed start to the season. They won their first game against the Toronto Nationals comprehensively by 8 wickets. However, they lost their next match and the following match was abandoned as well. So, they were in quite a tricky position with just three points in three matches. The Knights had three more matches to go and they needed at least two more victories to guarantee a playoff berth. Vancouver won their next two matches by big margins of six wickets and eight wickets against Edmonton Royals and Brampton Wolves respectively. Their final league game against the Winnipeg Hawks was washed out by rain and they finished comfortably in second with eight points in five matches.

Vancouver played the first qualifier last year as well but they had ended up losing that. It was a good showing in the second qualifier that helped them to make their march towards the final. They wouldn’t want to make their life tough by repeating the same mistake once again. Moreover, they have the mental edge as they had beaten Brampton comprehensively in the league encounter. However, Brampton is also a dangerous team, as they have showed this year, and they would be eager to avenge their defeat as well.

Lendl Simmons: The top-order batsman has been their highest run-getter this season with 167 runs in five matches at an average of 41.75. His overall strike-rate of 157.54 suggests that he has been pretty explosive as well.

Babar Hayat: The Hong Kong batsman has been a vital cog of their batting lineup ever since he joined the team midway into the tournament. He has smashed 119 runs in three matches at an average of 119 and a strike-rate of 152.56. Brampton have depended on him to accelerate the scoring during the latter stages of the innings.

Chadwick Walton: The Caribbean batsman has played a crucial role at No. 3 throughout the season for the Knights. He amassed a total of 188 runs in five matches at an excellent average of 62.66 and a decent strike-rate of 134.28. Not only that, these runs included two match winning fifties as well and that sums up the gravity of his contributions.

Tobias Visee: The Knights’ opener has played key roles in every match, even though small. He has got his side off to flying starts in almost all the matches. His strike-rate of 175.38 suggests how explosive he has been at the top of the order and a tally of 114 runs at an average of 22.80 is a decent return as well considering the way he bats.