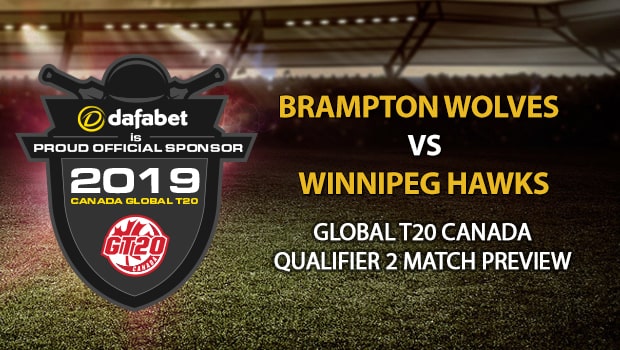 Preview: The Brampton Wolves will take on the Winnipeg Hawks in the second qualifier of the playoffs on Saturday.

Despite finishing first in the Canada T20 league stage, Brampton lost the first qualifier to Vancouver Knights by a big margin. Vancouver posted 170/4 in a match reduced to 16 overs per side. Brampton, on the other hand, were given a revised target of 181 to chase. However, they were bowled out for a paltry 103 runs and, hence, fell short of the total by 77 runs (DLS method). This was their weakest batting performance of the tournament and the fact that it came in an all-important playoff stage, made it even worse.

Interestingly, this was their second straight loss to Vancouver. They were the only team to beat Brampton in the league stage. The batting and bowling performance in that match was quite poor as well. Brampton were first bowled out for 138 and Vancouver, later, chased down the target with 8 wickets in hand. Brampton looked invincible during the first four games of the tournament but Vancouver brought out the chinks in their armour that can be exploited.

Winnipeg Hawks, on the other hand, made it past the Toronto Nationals by the narrowest of margins in the Eliminator. Toronto put up a massive total of 238/5 while batting first. It looked like a daunting ask for the Hawks and, more so, when they lost their first three wickets in the first four overs of their innings. However, a 91-run stand for the fourth wicket between JP Duminy and Sunny Sohal, and a 55-run stand for the sixth wicket between Duminy and skipper Rayad Emrit, turned things around for them. The Hawks reached 201/5 when rain interrupted in the 18th over. Play never resumed and the Hawks were declared winners by 2 runs (DLS method).

Anything could have happened in those last few overs as they still needed 38 runs in 17 deliveries but luck favoured them, just like it had during the entire tournament. They qualified for the playoffs as the fourth team on account of a better net run rate despite being so messy throughout the duration of the competition. It remains to be seen if luck will favour them in the same way in this match as well.

Colin Munro: He was the only bright spark in their disappointing loss to Vancouver in the previous match. He smashed 62 runs off just 25 deliveries even though other batsmen failed to deliver. He is now their second highest scorer in the tournament with 164 runs in five matches at an average of 41.

Lendl Simmons: The opener is going through a lean patch in the last few games but he is a vital cog of their batting lineup. Simmons has a total of 170 runs in six innings at an average of 34. It includes one fifty as well.

JP Duminy: It was his unbeaten knock of 85 off just 41 deliveries in the last match that kept them in the hunt of the massive target of 239 runs set by Toronto. He is now their highest run-getter and also the fourth highest run-scorer in the series with 249 runs in six innings at an average of 83. These runs include two match-winning fifties as well.

Chris Lynn: Although he was dismissed for just 21 runs off 13 deliveries in the last match, he did give the Hawks the initial impetus in the innings. Lynn has already played a vital role in both victories for them in the league stage. He is their second highest run-getter this season with 223 runs in five innings at an average of 44.60. Read more latest Indian cricket news here.