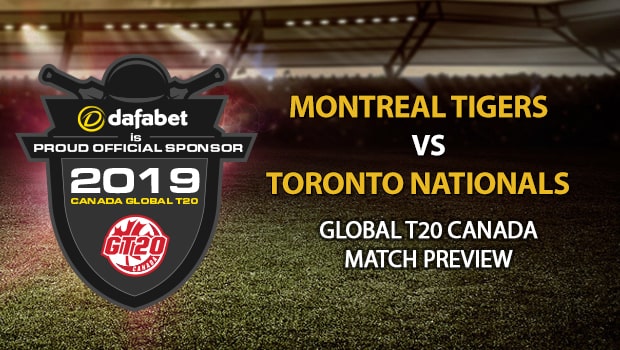 The Toronto Nationals will lock horns with the Montreal Tigers in the 15th match of the tournament at the CAA Centre in Brampton on Monday.

Both teams have had a mixed outing in this season so far. The Tigers began their campaign with a 24-run victory (D/L method) over the Winnipeg Hawks. However, they got thumped by 10 wickets against the Brampton Wolves in their next match and that loss brought out a lot of frailties in their batting and bowling departments. They looked all set to suffer a crushing defeat in the third match when the Vancouver Knights posted a total of 276/3 batting first. However, the match got abandoned and they were lucky enough to sneak past with a point. But a disciplined bowling performance in the last match saw them restricting the Edmonton Royals to a middling total of 153. Then, they chased it down with four wickets in hand riding on Kyle Coetzer’s knock of 62 at the top of the order. They have five points in four matches now and another victory will almost ensure a playoff berth for them.

Toronto, on the other hand, have been very scratchy this season. Their narrow miss on the playoff berth in the last season would have hurt them a lot and they wouldn’t want to experience the same fate once again. So, they need to get their act together before it’s too late. They have won one out of their three matches so far and will play another match on Saturday against the Brampton Wolves before this match. If they can win that match, it will give them a lot of confidence as Brampton is a strong side. The momentum gained in that match will only help them to perform well in this match against Montreal.

Skipper Yuvraj Singh endured a pretty hard time in the first match but has produced good knocks of 35 and 45 in the last two matches. Heinrich Klaasen has been in good form too as he has produced scores of 41, 45 and 15 in the three matches so far. Even Kieron Pollard scored a fifty in the last match. However, it is their bowling which needs attention. They lost their last match even after posting a total of 216/7. The likes of Manpreet Gony and Mark Montfort were pretty expensive and they might get replaced for this match.

Overall, it can be said that both teams have their flaws. However, the side which would be able to perform the best within its limits will ultimately emerge victorious in this encounter. (see cricket breaking news here)