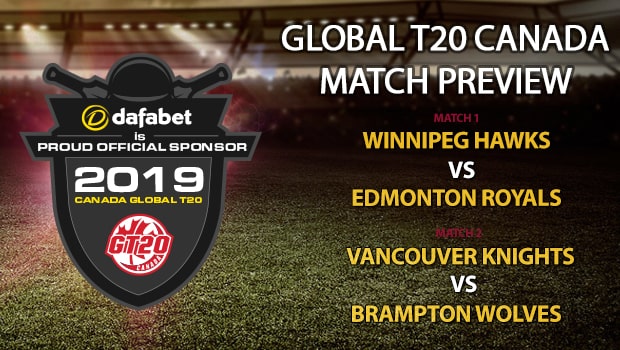 Two matches are scheduled to be played in the Global T20 League on Sunday. The Winnipeg Hawks will take on the Edmonton Royals in the first match and the Vancouver Knights will take on the Brampton Wolves in the second match. Both matches will be played at the same venue, the CAA Centre in Brampton.

In the first match, the Hawks will be looking to add one more win to their tally. They started off with a disappointing victory against the Montreal Tigers but bounced back with comprehensive victories against Vancouver Knights and Toronto Nationals by seven and three wickets respectively. The arrival of Chris Lynn has given their batting lineup a whole new dimension. He has played match winning knocks of 74 and 89 in back-to-back matches since his arrival. JP Duminy has been in good touch with the bat as well. He has 110 runs in three innings at an average of 55. Their bowling unit has performed decently as well but it has depended a lot on the exploits of Dwayne Bravo and Rayad Emrit. Other bowlers need to step up if the Hawks want to stand a chance of winning the upcoming matches.

The Royals, on the other hand, have experienced a disastrous start to their campaign. They have lost their first three matches and things don’t look bright for them going ahead. Neither their batting nor their bowling has clicked so far. Their batsmen have gotten off to starts but failed to convert them into big scores. Faf du Plessis is the only one who has scored a fifty so far. From the bowling front, they haven’t been good either. Shadab Khan has picked up wickets consistently but has lacked support from other bowlers. The other bowlers have been all over the place and, hence, they haven’t been able to get their act together as a unit.

In the second match, the defending Champions, Vancouver Knights, will be up against a high flying Brampton Wolves. The Knights have had a very tricky start to their campaign. They won their first match against the Toronto Nationals comfortably by 8 wickets but lost the very next match to the Hawks by seven wickets. They looked all set to register a record win having posted a total of 276/3 against Montreal Tigers. However, the match got abandoned and Vancouver had to satisfy themselves  with just one point. Their batting unit has been in good form. Everybody has performed so far. While their openers Chris Gayle and Tobias Visee showed their capability with scores of 122* and 51 in their third match against Montreal, Chadwick Walton and Rassie Van der Dussen have done a fairly good job at No.3 and No. 4 respectively as well. Their bowling unit lacks big names but they have been effective so far, and have complemented their batsman well. All they need now is a little bit of luck going their way.

Brampton, on the other hand, have been in excellent form and are enjoying a great time in their debut season. They look strong in both batting and bowling departments. The likes of Lendl Simmons, George Munsey and Shahid Afridi have all scored big runs. Moreover, their bowlers like Ish Sodhi and Zahoor Khan have come up with terrific bowling performances as well. All of their victories so far have been pretty dominating and they would be eager to maintain this momentum going into the playoffs. (see latest cricket news today)