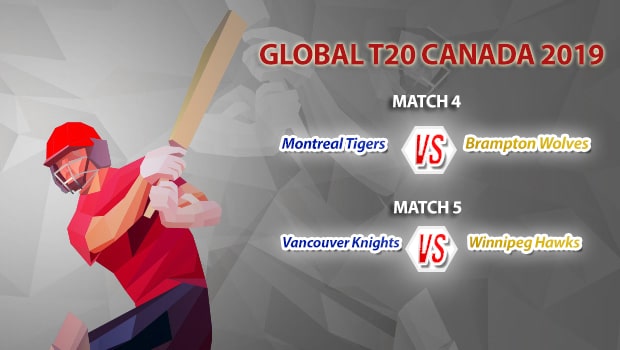 Team overview: Two matches are scheduled to be played on Super Sunday. The first match will see the Brampton Wolves taking on the Montreal Tigers, and the Vancouver Knights will take on the Winnipeg Hawks in the second match.

Montreal Tigers: It would be a little hectic for the Tigers coming into this match as they would be playing a match on Saturday as well. The result of this match will decide what mindset they come with to face the Wolves on Sunday. The Tigers consist of a strong squad nevertheless. The likes of Gerorge Bailey, Kyle Coetzer, Sunil Narine and Thisara Perera add much needed experience to their squad. And they would be backed by young guns like Keemo Paul, Mathew

Cross and other associate players like Steven Taylor and Mohammad Naveed. The Sri Lankan duo of Niroshan Dickwella and Isuru Udana are exciting prospects for their batting and bowling departments respectively.

Brampton Wolves: The Wolves, on the other hand, have some great all-rounders like Shakib Al Hasan, Shahid Afridi, Colin Munro and Darren Sammy in their squad. And the batting firepower they have in the likes of Lendl Simmons, Babar Hayat, Andre Fletcher and George Munsey is just top class. While all-rounders Shakib and Afridi will lead the spin bowling department, the pace bowling unit will be lead by Pakistani international Wahab Riaz.

Vancouver Knights: They have started their campaign on a bright note as they emerged victorious in their first match against the Toronto Nationals by eight wickets. The bowlers were disciplined and the batting was fabulous as well. Rassie van der Dussen and Chadwick Walton, both of whom scored fifties, were impressive in particular. They would be eager to stretch their winning run to two games on the trot when they face the Winnipeg Hawks on Sunday.

Winnipeg Hawks: Just like the Tigers, the match on Sunday will be quite hectic for the Hawks as well as they would be coming into this match after playing one on Saturday. They would like to bring winning momentum into this game as they would be facing a side that has already won its first game. The Hawks have a strong batting department consisting of the likes of Chris Lynn, Shaiman Anwar, Dwayne Smith and JP Duminy. Dwayne Bravo is the star all-rounder in the squad.

This is Brampton’s first season. So, they haven’t played against Montreal Tigers before. When the Vancouver Knights took on the Winnipeg Hawks last season, it was the former that emerged victorious by six wickets. Babar Hayat and Sheldon Cottrell starred with a knock of 65 and bowling figures of 3/28 respectively.

What to expect in these matches?

The Brampton Wolves look like the stronger squad in the first encounter. Their all-round strength is unmatched and the Tigers can’t match them in their batting and bowling firepower as well. So, a win for the Wolves is predicted.

The Vancouver Knights have the advantage coming into this match as they have already won against the Hawks in the previous edition and are also coming into this match on the back of a win in their opening encounter of the tournament. Although both of them are pretty much balanced as a team on paper, momentum and history favours the Knights in this fixture. More of India cricket match update.