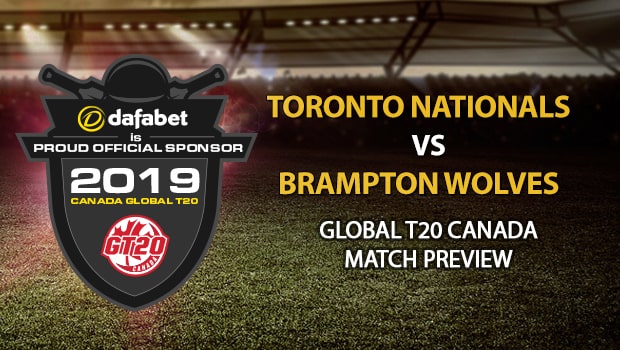 Toronto Nationals will take on the newest member of the GT20 Canada league, the Brampton Wolves, in the 12th match of the tournament at the CAA Centre in Brampton on Saturday.

The Wolves have made an excellent start to their debut season having won both of their opening encounters in comprehensive manners. They thumped the Montreal Tigers by 10 wickets in their first match and followed that up with a clinical 27-run victory over the Edmonton Royals in the next match.

Their openers, Lendl Simmons and George Munsey, have been in excellent form. They have gotten their side off to good starts in all the matches so far. Shahid Afridi has done his bit with the ball too. He has chipped in with a wicket in every match and his innings of 81 off 40 deliveries against Edmonton was stupendous as well. Ish Sodhi, in particular, has been on fire with the ball. He has eight wickets in the first two matches, which includes a five-wicket haul as well. Zahoor Khan has supported him well with four scalps in two matches as well. Overall, they look like a dangerous side with potent resources in both departments and, hence, appear to be one of the title contenders.

Toronto, on the other hand, have won just one out of their three matches so far. They missed out narrowly on a playoff berth last season and they wouldn’t want to repeat that this time as well. They lost their opening encounter by a disappointing margin of 8 wickets to the Vancouver Knights but came back in the next match against the Edmonton Royals to register a thrilling victory by two wickets. Although their performance was still not convincing in that match, the batting efforts of the tail-enders like Manpreet Gony made the victory possible.

In fact, both their batting and bowling has looked scratchy. The batsmen haven’t shown any sort of consistency and the bowlers have been indisciplined as well. It was visible once again as they lost their next match to the Winnipeg Hawks by three wickets.

The Toronto think-tank will definitely look at making some changes going into this match against a strong side like Brampton. Even then, their performance has to be absolutely flawless to get all two points from this match because the Wolves are hardly going to make any mistakes considering the way they have performed so far.