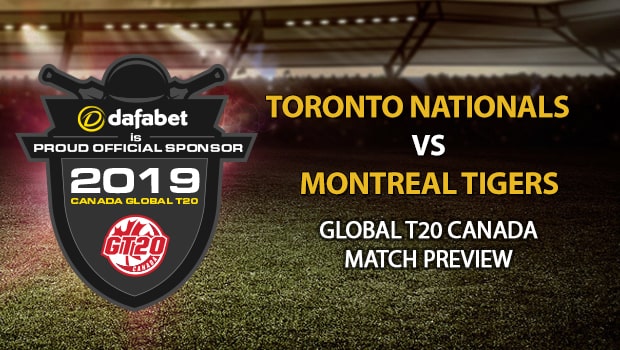 Preview: The Toronto Nationals and the Montreal Tigers would be eager to stake their claim on a playoff berth when the two sides lock horns with each other in the final GT20 Canada league game of the tournament on Wednesday.

A win for either side will confirm a playoff berth whereas a loss could mean the end of their campaign, thus, giving the fifth-placed Winnipeg Hawks a chance to make a late entry into the top four. At the moment, the Tigers are placed at third with five points from an equal number of matches and Toronto are at fourth with four points in five matches as well.

Both sides have had a mixed season so far. They have been brilliant at times but have been equally disappointing in some matches as well. Interestingly, this will be the second meeting between the two sides in a space of two days. They played against one another on Monday and Toronto emerged victorious by four wickets in a competitive encounter. While the batsmen from both sides failed to notch up big scores, it was the bowlers who impressed the most. Chris Green was impressive in particular as he came up with a match-winning all-round performance. After registering bowling figures of 2/24, he went on to score an unbeaten 30 to power Toronto to a much needed victory.

Toronto, however, would be sweating over the fitness of their skipper Yuvraj Singh. He walked off the field in the last game after facing only two deliveries as he complained of backache. It remains to be seen whether he would be fit enough to play. Either of Brendon McCullum or Calum MacLeod is expected to replace him otherwise.This match, however, is a do-or-die encounter for both sides by all means and, hence, they will come up with all guns blazing.

Heinrich Klaasen: The South African batsman has been their highest scorer this season. Klaasen has scored 156 runs at a decent average of 31.20 and an excellent strike-rate of 144.44.

Chris Green: The Australian all-rounder has been a vital cog of their batting and bowling lineup. He has picked up seven wickets in three matches so far at an excellent average of 13.85 and has also scored 50 runs, which includes a best of an unbeaten 30 in the last match.

Kyle Coetzer: He has been their anchor throughout this season. The Tigers have depended on Coetzer to play the long innings. He has amassed 125 runs in five matches so far at an average of 31.25. It includes a best score of 62 as well.

Fawad Ahmed: The Australian leg-spinner has accounted for five wickets in an equal number of matches so far and, that too, at an excellent average of 16.80. He has registered spells of 2/19 and 2/24 in the last two matches and, hence, is coming into this match on the back of good form.