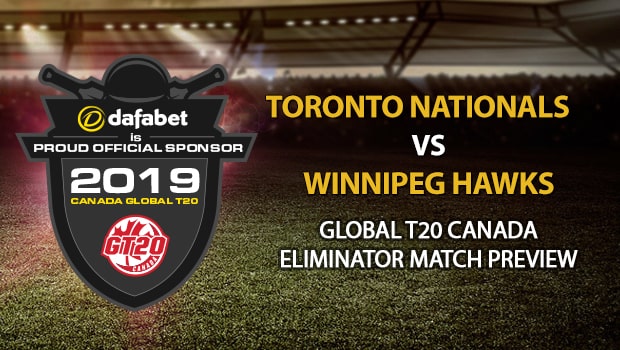 Third-placed Toronto Nationals will take on the Winnipeg Hawks, who finished fourth in the Canada T20 league stage, in the Eliminator on Friday.

Toronto made a late entry into the playoffs after a superb win in their last league game against the Montreal Tigers. This was their second straight win against the same opponents in a space of two days and that turned their season around completely. They had narrowly missed out on a playoff berth last season and it would have been quite heartbreaking for them if they would have fumbled this time as well. Although they got off to a disappointing start having lost their opening game to the Vancouver Knights by 8 wickets, they won their very next match against the Edmonton Royals in a thrilling manner. They had lost the following match once again and, thus, had only two points from their first three games.

Another loss against Brampton in their fourth match made life tougher for them but the two back-to-back matches against Montreal did the trick for them. They struggled with their bowling department initially but it really came off in the last few games. The batting department has been as good as ever.

The Winnipeg Hawks, on the other hand, rode their luck to qualify for the playoffs. They started their campaign with a 24-run loss (DLS method) to the Montreal Tigers as well. However, they won two straight matches after that. It was followed by two straight defeats once again and it was the point gained through their washed out last league game and a better net run rate that helped them to qualify.

It wasn’t the most clinical performances from the Hawks but they would be eager to bring their A game to the plate in the Eliminator. While the likes of Chris Lynn, JP Duminy and Shaiman Anwar have really fired in the batting department, it’s their bowling department that needs attention. They would be tough to beat if they can be just a bit more disciplined with their bowling.

Chris Green: The Australian all-rounder has played a vital role with both bat and ball for Toronto. In four matches, he has scored 50 runs at an average of 25 while batting lower down the order and it includes a match-winning knock of an unbeaten 30 also. Moreover, he has picked up 10 wickets with the ball as well and that sums up his all-round value.

Heinrich Klaasen: The South African batsman has been a vital cog of their middle-order. He is their highest run-getter and also the second highest run-scorer overall in the tournament with 220 runs to his name at an average of 44. These runs have come at a strike-rate of 154.92 and include a match-winning fifty in the last match as well.

Chris Lynn: The Australian batsman has made his bat talk in the tournament. He played key roles at the top of the order in both victories for the Hawks this season. His tally of 202 runs in four matches, at an average of 50.50 and a staggering strike-rate of 194.23 tells how good he has been.

JP Duminy: The South African batsman has also played a vital role in their middle order. He has scored a total of 164 runs in five matches at an excellent average of 54.66 and a strike-rate of 170.83 as well.