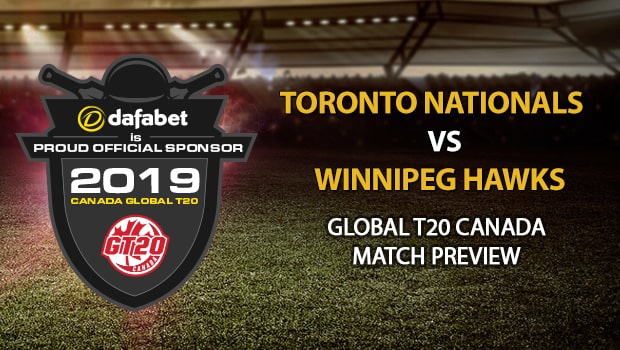 Preview: The Toronto Nationals will take on the Winnipeg Hawks in the seventh match of the tournament at the ACC Centre in Brampton.

Despite the victory, there are still some things that they need to sort out. The first and foremost is their batting. It has failed big time in both matches. None of the players have shown consistency apart from Heinrich Klaasen. Yuvraj Singh struggled in the first match with a 27-ball knock of just 14 runs. However, he made amends in the second match as he scored 35 off 21 deliveries. Still they looked on course to lose their second match on the trot when they were reduced to 125/7 while chasing a target of 193 runs. However, a late charge from Manpreet Gony (33 off just 12 deliveries) and other tail-enders took Toronto to a miraculous win over Edmonton.

Their bowling is another area which needs attention. It lacks a penetrating force and they have conceded runs at high rates in both the matches. The batting unit, as mentioned before, also needs to take responsibility. The Winnipeg Hawks, on the other hand, have also enjoyed the same trend of wins and losses in their first couple of matches so far but they have been better as a unit than Toronto.

In spite of a decent performance with both bat and ball, the Hawks were unlucky to  lose their first match by just 24 runs (D/L method). However, the addition of Chris Lynn to their XI in the next match against Vancouver Knights brought about a change in their fortunes. The Knights put on a commanding total of 208/5 on the board but what followed next was a whirlwind from the likes of Chris Lynn and JP Duminy. Lynn played a terrific knock of 74 off just 34 deliveries while opening the innings and Duminy remained unbeaten on 77 off just 38 deliveries as well. Dwayne Bravo also stepped up with a cameo of 36 off just 17 deliveries. Such knocks helped the Hawks in chasing down the total with 28 deliveries to spare, and, that too, with seven wickets in hand.

Looking at their performance so far, it seems that there is hardly anything that the Hawks need to sort out. Their bowling looks pretty effective. Bravo and Rayad Emrit are the main wicket-takers and the others can just support them. Batting, however, is their main strength and it looks totally flawless at the moment. The Hawks are expected to give Toronto quite a tough time in this match considering how lack luster the latter’s bowling performance has been. Follow link to browse new cricket news.