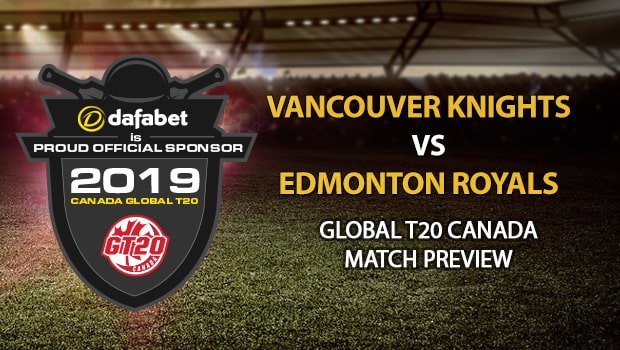 Defending champions Vancouver Knights will take on a struggling Edmonton Royals side in the 11th match of the tournament at the CAA Centre in Brampton on Friday.

It has been a mixed start to the tournament for the Knights. They won their first match against the Toronto Nationals by a comprehensive margin of eight wickets but they went down in the very next match against the Winnipeg Hawks by an equally big margin of seven wickets. They even posted a record total of 276/3 in their third match against the Montreal Tigers but the match got abandoned unfortunately.

Chadwick Walton and Rassie van der Dussen have been in excellent batting form for the Knights. They have shouldered the responsibility of their middle-order beautifully so far. While van der Dussen has scored 160 runs in three innings at an average of 80, Walton has amassed 118 runs in an equal number of innings at an excellent average of 59 once again. Their opening duo of Chris Gayle and Tobias Visee did look a little shaky in the first couple of matches but they turned the momentum in their favour in the last match against Montreal. While Gayle smashed an unbeaten 122 off just 54 deliveries, Visee scored 51 runs off 19 deliveries.

Their bowling hasn’t been that bad either. Despite having limited resources, they are doing fairly well. The bowling unit was pretty much economical in the first match. They did have a bad outing in the second match but their discipline will reap rewards more often than not.

The Edmonton Royals, on the other hand, are lurking right at the bottom of the table having lost all of their three matches so far. Although their batting has performed well in almost all the matches so far, it has been their bowling which has let them down. They look like a fairly good bowling unit if you look at names like Shadab Khan, Ben Cutting and James Neesham already there. But they have lacked the discipline to check runs and, thus, have paid the price for that.

Although there haven’t been big knocks from the Royals batsmen like that of other teams, most of them have chipped in with significant contributions to post good totals in all the matches so far. Skipper Faf du Plessis brought up the first fifty of the season for the Royals in the last match. So, what they need to focus on now is tightening their approach in both the departments. They have only three matches to go and they will need to win all of them, that too, by big margins in order to stand a chance of qualifying for the playoffs. (For more online cricket news)