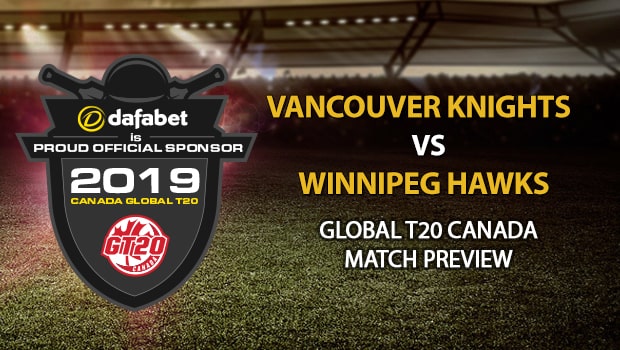 Preview: Defending Champions Vancouver Knights will take on the Winnipeg Hawks in the 17th match of the tournament at the CAA Centre in Brampton on Wednesday.

The Knights have already qualified for the playoffs as they are placed at second position in the points table with seven points in five matches. Nobody can displace them from this position even if they go on to lose this match. However, they would be supremely confident of winning this encounter as well, as they are coming into this match on the back of back-to-back victories.

They were in a tricky situation halfway into the tournament as they had only three points from their first three matches. However, comprehensive victories by six and eight wickets against the Edmonton Royals and the Brampton Wolves respectively, turned their season around.

The Hawks, on the other hand, need to win this match in order to qualify for the playoffs. This is a do-or-die match for them. They are currently placed at fifth with four points to their name in five matches. However, their qualification will depend on Toronto’s outcome in the last match as well. They have a better net run-rate than the Hawks and they will qualify as the fourth team if they win their last match by a comprehensive margin once again. But the Hawks should focus more on their own performance and let other things unfold in their own manner.

They were in a good position to qualify for the playoffs midway into the tournament. They had four points from their first three matches but big losses to the Brampton Wolves and the Edmonton Royals in back-to-back matches landed them in this situation.

The Knights are definitely buoyed by the confidence of their last two victories but the Hawks will have the mental edge in this encounter as they had aced their previous meeting in the tournament. Winnipeg had registered a seven-wicket victory over Vancouver the last time they met. So,it remains to be seen what is in store for this match now.

Chris Gayle: The Jamaican batsman is the highest run-getter this season at the moment. His tally of 277 runs has come at an excellent average of 69.25 and a strike-rate of 189.72. It includes two scores of fifty-plus, one of which is a mammoth score of 122*.

Chadwick Walton: The No 3 batsman for Vancouver has played an instrumental role for them this season. He is the third highest run-getter in the tournament, and also the second highest for his side, with 188 runs to his name at an excellent average of 66.26 and a strike-rate of 157.54. He has two fifties to his name as well, the latest of which came in the last match against Brampton Wolves.

Chris Lynn: The Australian batsman has played a key role at the top of the order for the Hawks this season. He is the second highest run-getter in the tournament, and also the highest for his side. His tally of 202 runs have come at a superb average and strike-rate of 50.50 and 194.23 respectively.

JP Duminy: The South African all-rounder has been a vital cog of the Hawks’ middle-order as well. He has amassed a total of 164 runs at an average of 54.66 and a strike-rate of 170.83. Click here for more cricket match news.