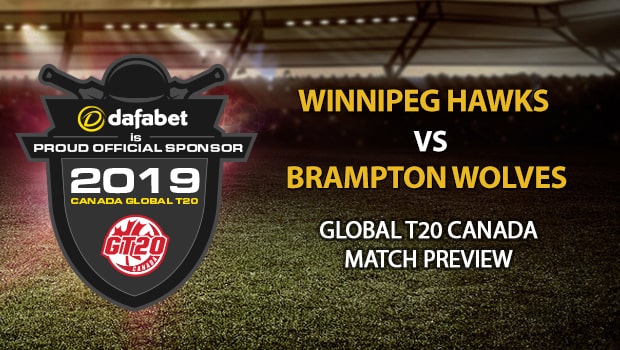 High flying Brampton Wolves will take on a rejuvenated Winnipeg Hawks side in the 10th match of the tournament at Brampton on Thursday.

The Wolves have started their debut season in a stellar fashion as they have been victorious in both of the matches they have played so far. They won their opening encounter of the tournament against the Montreal Tigers by a massive margin of 10 wickets while chasing a paltry target of 102 runs. And they were clinical in their next match also as they defeated the Edmonton Royals by a significant margin of 27 runs.

In fact, the Wolves seem to be the most balanced and lethal side in the tournament so far. They are equally strong in their batting and bowling departments and that was summed up by the way they performed in both the matches. Their openers, Lendl Simmons and George Munsey, finished the job off without any fuss in the first match. The other batsmen didn’t even feel the need to pad up considering the way they batted. And they posted a huge total of 207/5 in the next match once again. So, these kind of performances highlight their batting strength.

However, they are no less in terms of their bowling strength as well. Ish Sodhi has been on a roll as he registered a five-wicket haul in the first match and then followed that up with yet another terrific spell against the Edmonton Royals, in which he took three wickets as well. Other bowlers like Zahoor Khan, Shahid Afridi and Wahab Riaz have supported him well too. There are hardly any chinks visible in their armour so far and they have already made the other teams busy in making a thorough plan to tackle them.

The Winnipeg Hawks, on the other hand, have bounced back with back-to-back victories after losing their opening encounter to the Montreal Tigers by 24 runs (D/L method). They failed to chase down a target of 136 runs in the first match. Any chase above 10 runs an over is always a tough ask for any team in T20s. However, their batting has been bolstered by the addition of Chris Lynn in the last two matches. The Australian batsman has played terrific knocks of 74 and 89 runs in the previous two matches and, hence, these innings have played a pivotal role in chasing down 200+ totals on both occasions. JP Duminy has been in good batting form too. He has scores of 30, 77* and 3 in the tournament so far. Moreover, the likes of Shaiman Anwar and Sunny Sohal stepped up with scores of 43 and 58 respectively in the last match as well. So, their batting is slowly but surely falling into the right space and zone.

However, they do have a problem to deal with in the bowling department. Rayad Emrit and Dwayne Bravo have been excellent in terms of picking up wickets in these matches so far but they need support from other bowlers too. They are not getting that at the moment and the results are high scores being posted by opponents again and again. So, this is an area they need to pay attention to and we might see the think-tank making a few changes to the XI this time around.

Considering all these factors, it looks like the Wolves are the stronger force on paper and even in terms of performance on the field. The Hawks will, however, need to bring their A-game to the plate if they want to continue their winning run.