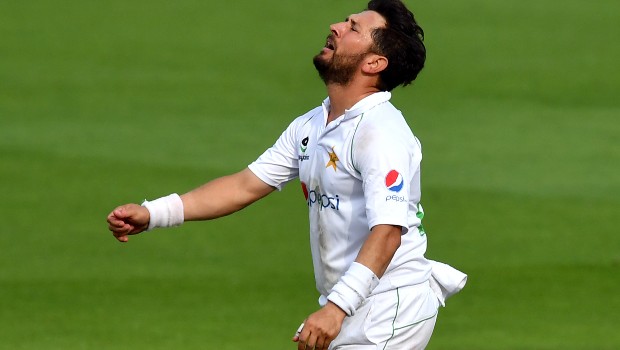 England’s veteran fast bowler Stuart Broad has been fined 15% of the match fees and also received one demerit point after he was reprimanded by his father and match referee, Chris Broad. Broad junior was fined for giving a send-off and using ‘inappropriate language’ after dismissing Pakistan’s leg-spinner Yasir Shah in the 46th over of the second innings.

Shah had added 33 crucial runs for the visitors to help propel Pakistan’s lead to 276 runs. The right-handed batsman came out to the crease on the penultimate day with an intent to get quick runs and he was also successful in the same.

After Broad finally induced an outside edge of the Shah’s bat, he had something to say to the right-hander. Broad was deemed to have violated article 2.5 of the International Cricket Council’s code of conduct.

Meanwhile, it was noticed that some words were exchanged between the two sides. Yasir Shah had exchanged words after Rory Burns was dismissed in the first innings. In fact, the leg-spinner had also reacted aggressively after dismissing Stuart Broad in the second innings and taking his revenge.

🏴󠁧󠁢󠁥󠁮󠁧󠁿 @StuartBroad8 fined and given a demerit point by his dad, match referee Chris Broad!

On the other hand, ICC had decided to use home officials as there are travel restrictions due to coronavirus pandemic. Furthermore, no family member can attend the match and it was good for Stuart Broad that his father had witnessed him get to the landmark of 500 Test wickets in the final Test match against the West Indies, being a match referee. Chris Broad is the official match referee for all the six Test matches against the West Indies and Pakistan.

Stuart Broad responded to the sanction news by writing on Twitter, “He’s off the Christmas card & present list.”

Meanwhile, Stuart Broad was the pick of the England bowlers in the first Test match as he scalped six wickets. Broad had also scored a crucial unbeaten knock of 29 runs in the first innings.

Broad was awarded the Player of the series against the West Indies as he had snared 16 wickets in two Test matches at an impressive average of 10.94.

The second Test match between England and Pakistan will take place at the Ageas Bowl, Southampton from 13th August.