Home » Cricket » How Rohit conquered his demons against Southee at Hamilton

How Rohit conquered his demons against Southee at Hamilton 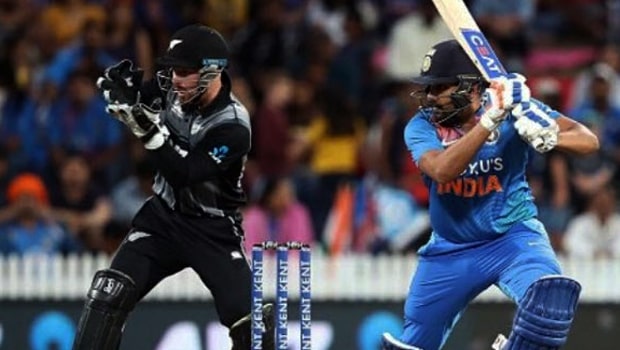 When Rohit Sharma and Tim Southee locked horns in the Super Over of the third T20I between India and New Zealand at Hamilton, the odds were stacked up against both of them.

Southee had seen his share of failures in Super Overs previously. He had been in the situation four times for New Zealand in the format previously. While he had succeeded in powering them to victory on one occasion, he had failed to defend 13 or more runs in the other three occasions.

Rohit is India's most capped T20 player (327 matches) but didn't score a run in Super Overs before today. #NZvIND

Rohit, on the other hand, was yet to score a run in Super Overs. He had faced the situation three times before in his overall T20 career but it was the first time he found himself in the midst of it in T20 internationals for India. Out of the three occasions, he was run-out once for a duck, was stranded at the other end without opening his account in another match and did not get to bat in the other one.

Moreover, the Indian batting stalwart has had his share of struggles against Tim Southee in limited-overs cricket.

The Kiwi bowler had dismissed him eight times in ODIs and T20Is combined, and Rohit’s strike-rate of 69.80 and 108.51 against Southee in ODIs and T20Is respectively sums up how much he struggled to score against him.

However, all of this was going to end on Wednesday. Nobody saw it coming though, at least not until the fourth delivery of the Southee’s Super Over to Rohit and KL Rahul. The duo had managed just eight runs off the first four deliveries of the over and getting 10 runs off the next two deliveries seemed like an uphill task.

But, among the batsmen you would want to have at the crease in this situation, Rohit Sharma was definitely one of them. He had shown that he was in good touch too as he had smashed 65 runs off just 40 deliveries in the match prior to the Super Over. And it was this outing that gave him the confidence to go on and finish the job.

Rohit dispatched the fifth delivery of the Super Over, a half volley on middle and leg stump, over the wide long-on boundary for a massive six. That brought the equation down to four required off the last ball and, as Southee came in charging to bowl the final delivery, Rohit’s eyes lit up seeing another half-volley on middle and off stump line. This time, he sent it straight over the long-off boundary for another six.

Thus, in just two deliveries, Rohit had conquered his demons against Southee and had powered India to a thrilling victory to seal the five-match series as well.