How will Rohit Sharma counter the South African pace threat 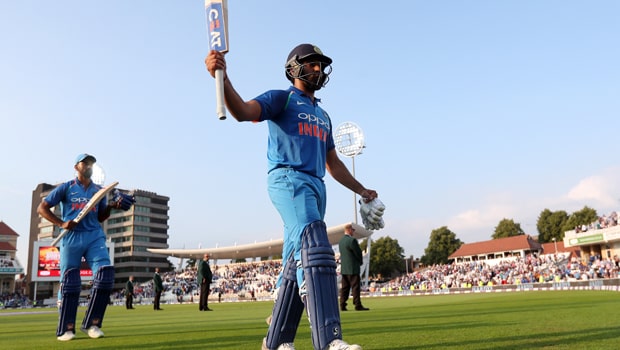 Rohit Sharma’s dismissals in the recently concluded T20I series between India and South Africa showed that the Proteas were well prepared to handle the Indian batting stalwart.

The 32-year-old was dismissed lbw by Andile Phehlukwayo for just 12 runs in the second T20I at Mohali. And in the final T20I at Bengaluru, he was out caught in the slips off Beuran Hendricks bowling, who was specifically brought into the side for that match to put a leash on Rohit early on in the inning. So, if these dismissals were anything to go by, it can be said that the South Africans came here with a full-proof plan to negate the threat of Rohit in the T20Is.

And when the three-match Test series kicks off with the first Test at Visakhapatnam on October 2, it is more than guaranteed that they will have a few tricks up their sleeves to get rid of this Indian batting giant, who looks all set to open the innings for India national cricket team, once again.

In fact, the management’s desire to open with Rohit in Tests has received widespread criticism from every nook and corner of the cricketing fraternity. Stories of his struggles against the swinging red-cherry aren’t unknown to anyone. Yet, their decision to back him as an opener is quite baffling.

Yes, there are high chances that he might click on Indian batting tracks which don’t offer that much help to the pacers. But even a hint of movement– even in white-ball cricket– has proved enough to trouble him on previous occasions. So, opening the innings in Tests is going to be quite a tough ask for him and his record against the South African pace attack backs this fact.

South Africa are touring with four pacers–Kagiso Rabada, Lungi Ngidi, Vernon Philander and Anrich Nortje–for this series. While Rohit is yet to face the likes of Nortje and Ngidi in India Test cricket team properly, his record against Rabada and Philander suggests how big a challenge opening is going to be for him.

Both Rabada and Philander have dismissed Rohit thrice each in Tests while bowling 58 and 50 deliveries to him respectively. And 87 of those 108 deliveries combined have been dots. So, that sums up how the two bowlers have had the upper hand over Rohit. Ngidi, on the other hand, has bowled just six deliveries to Rohit in Tests without any success so far. But he has already dismissed him twice in 20 deliveries in the ODI format. This sums up how he struggles against the South African pacers once again.

The struggle doesn’t end here as there is Anrich Nortje too who is yet to play his maiden Test for the Proteas. However, he is fully capable of becoming a nightmare for Rohit as he can notch up speeds of over 145 kph consistently.

So the signs don’t look good for India’s strategy to back Rohit as an opener in this series. The numbers are totally against the move. However, it remains to be seen whether Rohit can turn it around.