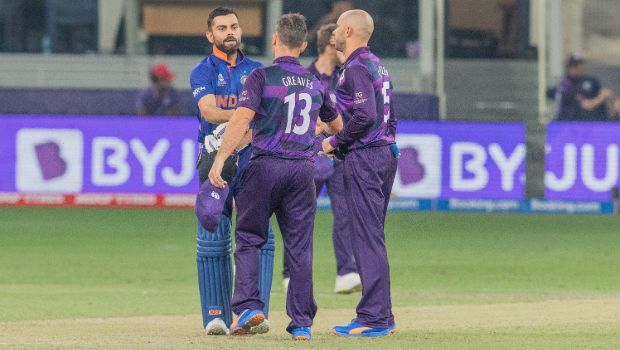 Former Indian opener Virender Sehwag has put his weight behind Virat Kohli to continue captaincy in ODI and Test format.

Kohli led India for the last time in the T20I format against Namibia in the team’s last match of the T20I World Cup 2021 at the Dubai International Cricket Stadium on Monday as the Men in Blue were knocked out of the tournament.

Kohli led India in 50 T20I matches in which the team won 32 matches, lost 16 while two matches ended in no result. The talisman had stated that he wants to manage his workload and thus he has given up his T20I captaincy.

In fact, it has been reported that Kohli will continue to lead India in the Test format while Rohit Sharma could lead the team in ODI format as well. It is all but confirmed that Rohit will take over the captaincy baton for the T20I format as he has a fabulous record.

While answering a question on his Facebook show, Sehwag said: “This is Virat’s decision but I don’t think he should leave the rest two format’s captaincy. If he wants to play just as a player, it is his decision. I feel under his captaincy, India is playing good and his record as a captain is brilliant.

“He is a good player, an aggressive captain and leads from the front. I reiterate that leaving or not leaving captaincy in ODIs and Tests should be his personal decision.”

On the other hand, India hasn’t been able to go all the way in the major ICC events. Team India last won a major trophy back in 2013 when MS Dhoni led the team to glory in the 2013 Champions Trophy.

Since then India has been consistent in the big events but they haven’t been able to bring their best in the knockout matches. Sehwag added that the team must introspect their on their failure to win major ICC tournament.

“I know we should support the team during bad times but it’s been a long time we haven’t won any major ICC tournament. India should definitely introspect on it. Winning bilateral series is one thing but people only remember you if you win world tournaments consistently.”

India will next face New Zealand in their home conditions.