I have always focused on short term goals – Rohit Sharma 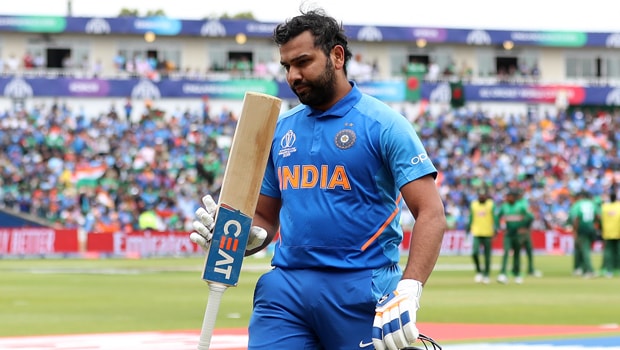 It is a famous adage in the cricket world, ‘take one over at a time’. Set yourself short targets and try to achieve them in quest to get to the bigger ones. Former Australian wicket-keeper batsman Adam Gilchrist had also said that the next ball should be the most important thing for a player in the Amazon documentary ‘The Test’.

Indian white ball vice-captain Rohit Sharma is following the same mantra and it is rewarding fruits for him. The flamboyant batsman said he has always focused on short term goals as long term targets don’t work for him.

It is better to not plan too far ahead and Rohit Sharma is happy that his strategy has worked wonders. The stylish batsman is one of the most consistent batsmen in the ODI format and he was able to turn the tide after the 2013 Champions Trophy.

Rohit was at his best in the 2019 World Cup as he top-scored in the tournament with 648 runs and scored five centuries which is the most for any batsman in a single edition of the World Cup.

The Mumbai batsman believes it is better not to think too far ahead. Rohit added he plans for next two to three months and tries to make his strategy for the upcoming series on the basis of the opponent’s strengths and weaknesses. The Indian opener stated he will continue to follow this stratagem in the future.

“Over the years, I’ve realised that long term goals won’t help you in any way, on the contrary it will add to your pressure and stress. I have always focused on short term goals which are mainly the next few games in the upcoming 2-3 months who is it against, what can I do best,” Rohit told Star Sports’ Cricket Connected.

“Setting goals for each series or tournament helps me a lot and I will continue to follow this method in the future,” he added.

On the other hand, the coronavirus pandemic has changed everyone’s life. Rohit is hopeful that the team will get back to action and they will analyse their preparation according to the opposition. There are doubts over the hosting of the IPL and even the T20 World Cup set to be played in Australia is expected to be postponed amid the health crisis.

“In the upcoming years, I hope we get the opportunity to play cricket, as we don’t know when we will play again. When we resume playing cricket, we will have to see what’s coming our way – whether it’s T20 World Cup or IPL. We even had a big bilateral series against Australia planned. We will have to analyse and see who we are playing against,” he said.

It would be interesting to note how the cricket season will begin once again. ECB is planning to host the Test series against Pakistan and West Indies and it will give an idea to other boards. England Test players will also begin training in two weeks time.