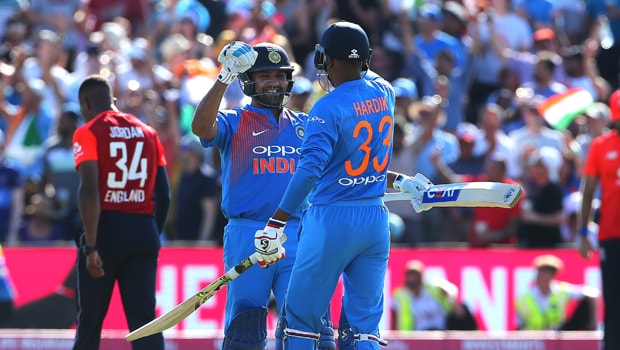 Indian all-rounder Hardik Pandya believes that his best years have come while playing under the leadership of Mumbai Indians captain Rohit Sharma. The MI skipper has backed Hardik to the hilt and the all-rounder has not disappointed with his performances. Hardik made his IPL debut in 2015 and he has been an integral part of the franchise since then.

Pandya has provided the finishing touches for the club and he is known to hit the ground running. The combative right-hander has an impressive strike rate of 154.78 and thus he can score runs in a jiffy. Pandya has also done a decent job with the ball and his bowling has surely improved.

Meanwhile, Rohit Sharma is known to get the best out of the players. He has given freedom to junior Pandya and the results have been fruitful. Rohit has taken the club to four IPL titles and thus Mumbai Indians is the most successful franchise in the tournament.

“I have always enjoyed playing with Rohit and he has been a great captain. We don’t have much conversation about the game but I have had my best years playing under him,” Pandya is quoted as saying by the franchise.

On the other hand, Pandya also spoke about his teammate Jasprit Bumrah, who has taken giant strides in the last few years. In fact, both Bumrah and Hardik came into the scene at the same time and they have enjoyed the success together.

Bumrah has been right on the money and he is one of the best death bowlers going around. The Gujarat pacer has also had a fine start to his Test career as he scalped 68 wickets in 14 Test matches.

“He’s calm and knowledgeable. He’s someone who I enjoy being with. We have got success together and have genuinely shared that success,” he said.

Meanwhile, Hardik Pandya has been out of action due to injury. Pandya had a back surgery and he has recovered now. However, he feels that his body is not yet ready for the Test fold and he wants to be best utilised in the limited overs format.

Pandya will look to make a good comeback when he resumes his training.