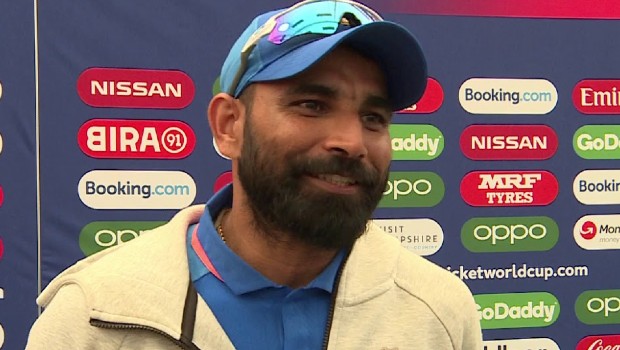 India’s fast bowler Mohammad Shami has revealed a shocking statement as he stated that he played the entire 2015 World Cup with a fractured knee. In fact, Shami revealed that the knee broke in the first match against arch-rivals Pakistan. However, the fast bowler added that it got worse before the semi-final clash against hosts Australia.

Shami informed the team management and skipper MS Dhoni that he cannot play with such pain. However, the think tank and Dhoni added that they cannot play a new bowler in the all-important semi-final match and thus Shami had to play at any cost.

The Bengal pacer added that the team’s physio Nitin Patel gave him the confidence to keep going despite the big injury. Shami said that he played the whole tournament after taking pain killers and doctors used to take out fluid from his knee everyday as there was no difference between the size of the knee and thigh.

“The knee broke in the first match itself. My thighs and knees were the same size, doctors used to take out fluid from them everyday. I used to take three painkillers,” Shami told former Indian pacer Irfan Pathan during a candid chat on Instagram live on Wednesday.

Shami revealed that he felt throwing in the towel after bowling the first spell against Australia in the semi-final and said the same to Dhoni. However, the Indian captain showed the confidence in Shami to keep bowling and not concede more than 60 in his quota of ten overs. But Shami went for 68 without taking any wicket as Australia went on to post 328 runs.

Shami added that many believed it was the end of his cricketing career.

“Before the semi-final match against Australia, I told the team that I cannot take any more pain,” said Shami.

“Mahi bhai and the management showed faith in me and they really kept confidence in my abilities.

“I played the match and gave just 13 runs in my opening spell. Then I went off the park and told Mahi bhai that I cannot bowl any longer. But he told me he cannot go to part-time bowlers and asked me to not give away more than 60 runs. I have never been in such a condition like this, some had said my career is over, but I am still here,” he added.

Shami bowled his heart out despite going through the massive injury. It is absolutely crazy to think the pain Shami must have endured during the whole tournament whenever he was running into bowl. However, Shami showed great character as he scalped 17 in seven matches at an impressive average of 17.29 to finish as the joint fourth highest wicket-taker of the tournament.