I respect Virat Kohli but don’t fear him – Naseem Shah 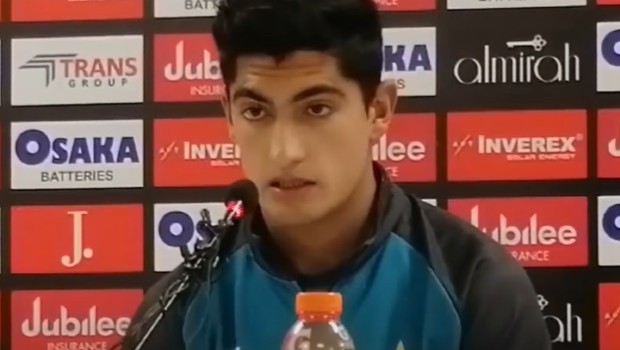 Pakistan’s pace sensation Naseem Shah has revealed that he is excited to play against India and bowl against Virat Kohli. The Indian captain is one of the best batsmen in the world and Shah added that he wants to test himself against the best in the business. Shah is also eager to play against arch-rivals India and he is aware of the fact that performances against India can make or break a player’s career.

Meanwhile, it is well known that India and Pakistan don’t often lock horns with each other in bilateral series due to the political tension between the two countries. Both the arch-nemesis generally take on each other in the major ICC tournaments like the World Cup and the Asia Cup.

Virat Kohli has been the most consistent batsman in the world and there is hardly any chunk in his armour. On the other hand, Naseem Shah has impressed with his pace and he is expected to get better with experience.

“I hope that I can bowl well against India when that chance comes by and won’t let our fans down. As for Virat Kohli, I respect him but don’t fear him.”

“It’s always a challenge to bowl to the best, but that’s where you have to raise your game. I look forward to playing against Virat Kohli and India whenever that chance comes,” Naseem Shah told Pakpassion.net.

The 17-year Pakistan pacer has thus far played four Test matches and he has impressed with his skills. The right-arm fast bowler has scalped 13 wickets at an average of 26.85. Shah made his Test debut against Australia at the Gabba, Brisbane and could only take one wicket.

Shah also became the youngest Test bowler to take a five-wicket haul and a hat-trick. The fast bowler scalped 5-31 against Sri Lanka and he is expected to have a great future for Pakistan.

On the other hand, Virat Kohli has a great record while playing against the fast bowlers. Kohli likes the ball to come on to the bat and he is a technically strong batsman. Thus, it will be an interesting contest when Kohli and Naseem Shah will face each other. Kohli will have the advantage as he has got all the experience in the world.