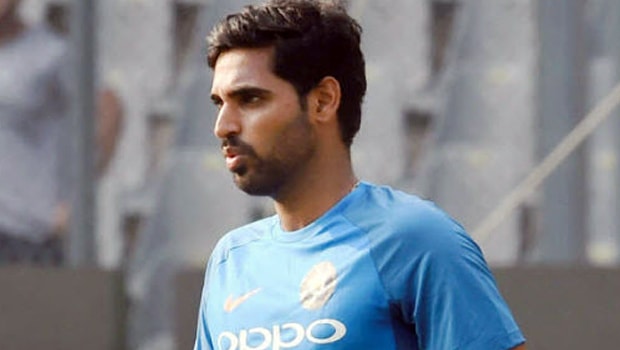 India’s swing pacer Bhuvneshwar Kumar has revealed that he has learned a lot from Indian skipper MS Dhoni. Kumar has played under the tutelage of MS Dhoni and was able to take giant strides while playing under him. The Uttar Pradesh pacer added that he likes to focus on the process like MS Dhoni.

Bhuvneshwar Kumar, who is well known for his swing, feels if the small things are done properly, then the end result takes care of itself. Kumar stated that like MS Dhoni he likes to be detached from the result when he is bowling in the death overs.

Bhuvneshwar Kumar has done a fine job in the fag end of the innings. The Meerut born pacer has a good yorker and also has variations like the slow ball in his repertoire to keep the batsmen at bay.

It is important for a bowler to be cool and composed when he is bowling in the end overs as the modern day batsmen are well known for their pyrotechnics. Even if a bowler is slightly off the mark, it can lead to runs.

“I try to keep the same thinking. Like MS Dhoni, while he is a finisher as a batsman hence, a player learns from his peers. A player knows the result whether it would be a win or loss; however, to get to that, small things are needed to get to come into play. Hence, if a player is committed to the process, they aren’t concerned about the outcome.

“Thus, I try to stick to the process as much as possible. I remember my 1-2 seasons of IPL when I was entirely focussed on the process that results became a secondary thing for me. However, when taking the overall outcome into account, it was inclined to be positive,” Bhuvneshwar Kumar said while talking to Deep Dasgupta on ESPN Cricinfo CricketBaazi.

It is never easy to perform when the pressure is high and Bhuvneshwar has come out with flying colours whenever he is put under the pump. Bhuvneshwar Kumar ended as the highest wicket-taker in the IPL 2016 as he scalped 23 wickets in 17 IPL matches at an average of 21.30 and thus he was instrumental in the triumph of Sunrisers Hyderabad.

Bhuvneshwar once again finished as the leading wicket-getter as he snared 26 wickets in 14 matches of IPL 2017 at an impressive average of 14.19.

The 30-year pacer has snared 132 wickets in 114 ODI matches whereas he has claimed 41 wickets in 43 T20I matches. The right-arm pacer hasn’t played consistently in the recent past as he was ruled out due to injury and he would like to make a solid comeback.