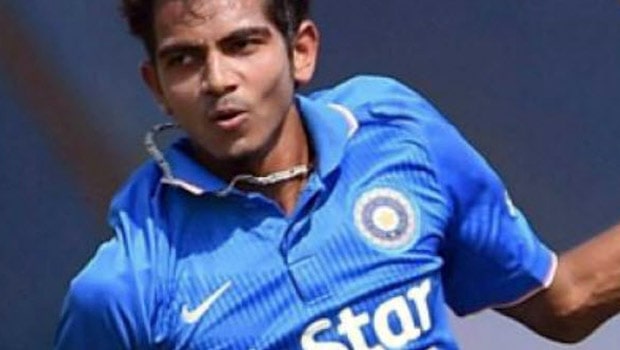 However, the young paceman didn’t have the rub of the green on his side as he was ruled out due to injury and had a frustrating time. In fact, Nagarkoti could have been doubtful if the IPL 2020 had started from March 29, which was the original schedule. However, the break due to Covid-19 helped Nagarkoti in recuperating on time.

The 20-year old fast bowler has impressed with his raw pace. The youngster will now get the opportunity to share the dressing room with the best fast bowler in the world, Pat Cummins, who became the most expensive overseas players in the IPL history.

Cummins had also struggled with injuries in the formative years of his career and Nagarkoti can learn a lot from the number one Test bowler in the world.

On the other hand, the prodigy fast bowler heaped praise on his former Under-19 coach, Rahul Dravid. As Nagarkoti was struggling with injuries, Dravid gave the example of Pat Cummins, who could not play his second Test match for six years after making his debut against South Africa.

“Dravid sir came to me and told me,’I understand how you are feeling but please take things positively. Pat Cummins did not play for 3-4 years either, but look now he is the best bowler in the world. So always stay positive and think about what you can do in your life. So always learn from your mistakes and make a strong comeback,'” Kamlesh Nagarkoti said.

Furthermore, Nagarkoti will get the opportunity to play alongside Eoin Morgan, who had taken England to glory in the 2019 World Cup.

The fast bowler from Rajasthan has scalped 11 wickets in nine List A matches. Nagarkoti has all the skills under his belt and he would like to impress with his speed in the upcoming IPL. The tournament will begin from September 19 in the UAE.