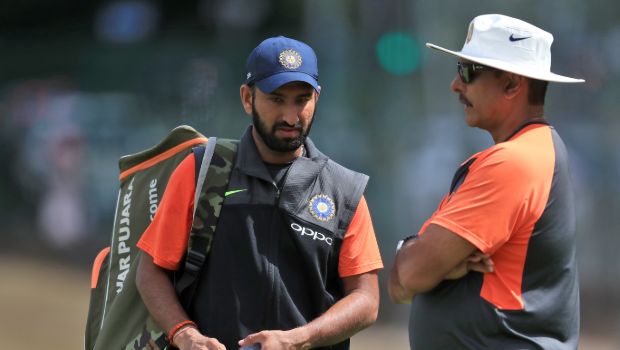 India’s Test number three Cheteshwar Pujara stated that he will be a tad surprised if his Saurashtra’s captain, Jaydev Unadkat doesn’t earn a call-up to the Indian side. The left-arm seamer had a dream domestic season leading his team to their maiden Ranji Trophy crown.

Jaydev Unadkat led with aplomb and he was instrumental in the success of the team. The medium pacer had a stunning season with the ball picking up 67 wickets at a staggering average of 13.23. Unadkat’s tally of 67 scalps is the most for any pacer in the history of the tournament, whose first season was played back in 1934.

Unadkat had scalped 10 wickets in the semi-final against Gujarat, taking three in the first essay and galloping seven in the second dig. The left-arm pacer also provided the crucial breakthrough of Anustup Majumdar, who was batting on 63, to get his team back on top on the final day.

“Jaydev was modest that he would not be thinking about the Indian call but I will be surprised if he is not picked in the Indian team,” said Cheteshwar Pujara.

“Jaydev has bowled exceptionally well throughout the season. If someone takes 67 wickets in a season, I don’t think there is anyone who can perform better in the Ranji Trophy. There has to be a lot of importance to Ranji Trophy performance to get picked for the Indian team,” he added.

Unadkat was able to tick all the right boxes as he took seven five-wickets haul and three ten-wicket haul in the 10 matches of the Ranji Trophy 2019-20 season. In fact, the Saurashtra captain fell one short of record 68 wickets in a Ranji edition, a record which was registered by Ashutosh Aman (Bihar) in the 2018-19 season.

Jaydev Unadkat, who represents Rajasthan Royals in the Indian Premier League, has played a solitary Test match, seven One-Dayers and ten T20I for the national side. Unadkat added that he still has the hunger to make a comeback into the Indian team.

“I still have that hunger to make a comeback. The hunger has never been stronger than this and that actually kept me going throughout the season,” said Unadkat.
“To be honest, it was challenging physically surviving the season. Bowling those long spells as a fast bowler in almost every game.

Unadkat will like to keep up his good form going and he will definitely reap the rewards for his good renditions in the domestic circuit. However, all the domestic fixtures have been suspended by the BCCI due to coronavirus outbreak.