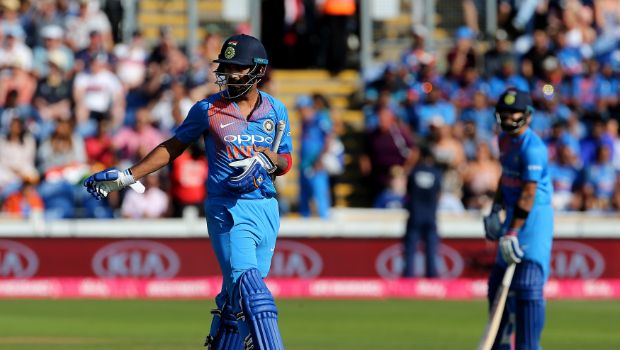 India’s wicket-keeper batsman KL Rahul has broken into the top three after gaining a spot in the latest ICC T20I rankings.

India’s opener Shikhar Dhawan also gained places in the latest update of the rankings and moved to the 19th place. Dhawan also scored 81 runs in the three-match series.

On the other hand, Washington Sundar also gained places in the bowler’s rankings and he is the highest placed Indian bowler at the 11th rank. Sundar scalped two wickets in the series against Australia but impressed with his economy rate of 7.08 as he bowled in the powerplay overs.

Australia’s leg-spinner Adam Zampa gained two places to break into the top five bowlers. Zampa scalped three wickets in the series and now occupies the fourth place in the rankings table. In fact, all the top eight bowlers in the rankings are spinners. The list is topped by Afghanistan’s talisman Rashid Khan and Mujeeb Ur Rahman.

On the other hand, England’s batsman Dawid Malan had earlier achieved the highest rating points in the ICC T20I rankings. Malan has 915 rating points under his belt whereas Pakistan’s skipper Babar Azam is at the second place.

Meanwhile, Jasprit Bumrah was rested in the three-match series to be fresh for the all-important Test series. Thus, Bumrah has slipped to the 17th place in the T20I rankings. Furthermore, Rohit Sharma also lost points as he didn’t play in the T20I series due to his hamstring injury. Rohit is at the 14th place and he is the third-highest ranked Indian batsman.

India will take on Australia in a four-match Test series and the first Test match will take place at Adelaide Oval from December 17.