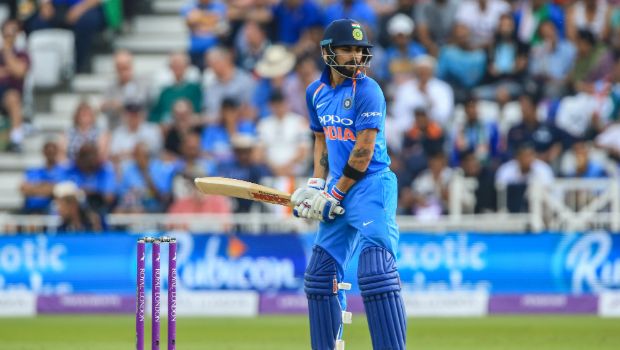 The Indian skipper Virat Kohli has gained one place to move to the fourth position in the latest update of the ICC T20I rankings.

Kohli had a sublime series against England as he racked up 231 runs in five T20Is at an impressive average of 115.50 and a whirlwind strike rate of 147.13. Thus, the Indian skipper was awarded the Player of the Series award for his prolific performances.

KL Rahul slipped by a position to fifth place in the rankings with 743 rating points after having a torrid series against England. The flamboyant batsman could only muster 15 runs in the four T20Is and thus he was dropped from the final match.

Meanwhile, there was no changes in the top-three batsman list as Dawid Malan, Aaron Finch and Babar Azam retain their respective positions.

New Zealand’s Devon Conway also made a gain as he moved a place to take a ninth place in the rankings.

On the other hand, India’s limited-overs deputy Rohit Sharma, who scored a fine knock of 34-ball 64 in the final T20I against England, made a vault of three places to take the 14th rank in the table with 613 rating points. Suryakumar Yadav, who scored a fine fifty in his debut innings and also scored 32 runs off 17 balls in the deciding T20I has moved into 66th place in the T20I rankings.

Rishabh Pant took a leap of 11 places in the rankings to occupy the 69th place. The left-hander scored 102 runs in four innings.

England’s wicket-keeper batsman Jos Buttler also gained a place to move to the 18th rank after he finished the series as the second-highest run-getter with 172 runs at an average of 43.

Furthermore, Bhuvneshwar Kumar who made an impressive comeback at the International level after taking four wickets in five T20Is, has taken giant strides in the rankings. Kumar had slipped to 45th rank but he has now moved up by 21 places to take up the 24th rank.