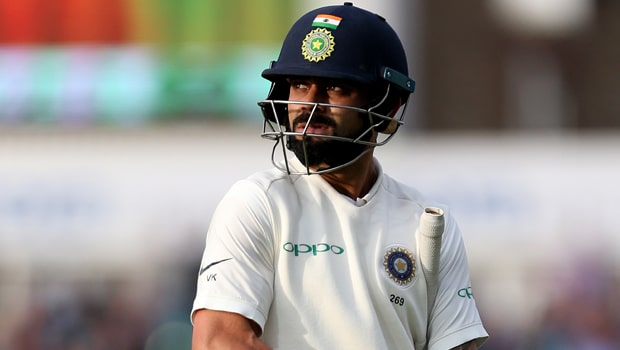 India skipper Virat Kohli is still the number one batsman in the world.

The skipper retained his top spot among batsmen, but fellow batsmen, Cheteshwar Pujara and Ajinkya Rahane, dropped in the latest ICC Test rankings released on Wednesday.

Kohli, who has 928 points maintains the top spot ahead of second-placed Australian maestro Steve Smith who has 911 points

According to the latest ranking released by the cricket governing body, ICC, Pujara slip down to seventh from sixth with 791 points, followed by Rahane, who occupied the ninth spot after slipping a couple of positions with 759 points.

India’s pace spearhead, Jasprit Bumrah, who recently returned to action after an injury layoff, remained static at sixth position in bowling with 794 points. In contrast, spinner Ravichandran Ashwin who has 772 points and seamer Mohammed Shami with 771, occupied the ninth and 10th spot, respectively.

Meanwhile, Australian cricketer, Marnus Labuschagne, moved up to a career-best third place after the 25-year-old stepped up one spot after scoring 215 and 59 in the final
Test against New Zealand to become the highest scorer in the recently-concluded series with 549 runs. He amassed 896 runs from his five previous Tests, which include two at home against Pakistan.

Also, Australian speedster Pat Cummins occupied the top spot in bowling with 904 points ahead of Neil Wagner, who boasts of 852 points and West Indies’ Jason Holder with 830 points.

Mitchell Starc also equaled a career-best fifth position he achieved in March 2018. The Australian fast bowler finished with 15 wickets in the series that included four in Sydney while Nathan Lyon’s spinning abilities, which made him get ten wickets pushed, moved him up five places to joint-14th.

New Zealand all-rounder Colin de Grandhomme also made a notable improvement on the chart moving from 47th to 39th among batsmen and from 36th to 34th among bowlers.

Matt Henry was also among the gainers, moving up three places to 66th among bowlers.

England all-rounder Ben Stokes finally joined the top ten for batsmen for the second time in his career after scoring 47 and 72, moving from 15th to 10th. It could be recalled that he was ninth in November last year.

Courtsey of his maiden Test century, Dom Sibley, has moved 87 places to 80th while fast bowler James Anderson who recorded his 28th five-wicket haul in the first innings returned to the top 10 for bowlers.