Home » Cricket » ICC U19 WC: Top performers in India’s road to the semi-finals

ICC U19 WC: Top performers in India’s road to the semi-finals 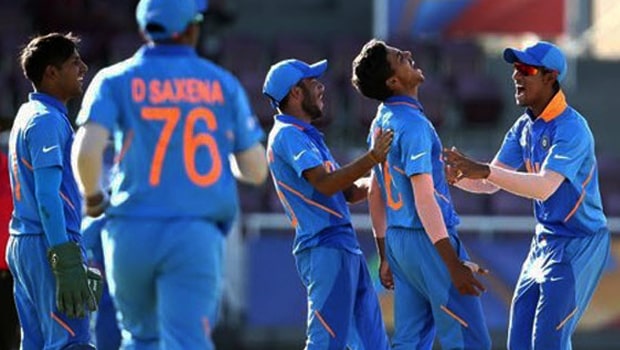 The India U19 team had proven themselves to be the early favourites to win the tournament even before the mega event had started. And, now, they have only gone closer to fulfilling everyone’s expectations as they made their way to the semi-finals by beating Australia in the quarterfinals. Not only that, they have enjoyed an unbeaten run during their road to the semi-finals.

They topped their Group as they beat all three of the other teams Japan, New Zealand and Sri Lanka in their respective matches. It was a complete Team effort but there were some players who stood out with their performances. So, let’s have a look at them

The 17-year-old batsman has been the leader of India’s batting unit. He smashed match-winning fifties in three out of the four matches so far, and the only match in which he didn’t go past fifty was against Japan when India had to chase just 42 runs for a win. Yashasvi remained unbeaten on 29 in that game as well. His best of 62 came in the all-important quarterfinal against Australia U-19 when India had lost three early wickets. Moreover, he had claimed a wicket during the match against Sri Lanka as well and that sums up how good a campaign he has had so far.

The Indian leg-spinner is the joint highest wicket-taker in the tournament at the moment. He has played defining roles with the ball in each and every game of the tournament so far and when his team needed him to step up with the bat, Bishnoi did that as well. He played a crucial knock of 30 off just 29 deliveries in the quarterfinal against Australia and, thus, gave his team a decent total to defend. Bishnoi was also bought by Punjab during the Indian T20 League auction this year. That goes on to show how much faith people have in his abilities.

The pacer came up with his best in the crucial quarterfinal encounter against Australia U-19. He produced a wonderful spell of 4 for 24 while defending a low total of 233 runs and, thus, helped his team to march into the semi-finals with a comprehensive 74-run victory. Tyagi has often touched the 140 kph mark and his natural ability to swing the ball makes him even more lethal. He will have an equally important role to play in the upcoming games as well.

The left-arm spin bowling all-rounder hasn’t played all the games but he made match-winning contributions with both bat and ball in the limited opportunities he got. His spell of 3 for 28 helped India to register a clinical victory over New Zealand in a rain-curtailed match and, then, he followed that up with an unbeaten 55 down the order in the quarterfinal against Australia. These contributions have had a telling impact on the fortunes of his team and, hence, he has gone on to prove himself as a vital part of India’s jigsaw in the tournament.