Home » Cricket » ICC U19 World Cup: The Underappreciated side of Yashasvi Jaiswal

ICC U19 World Cup: The Underappreciated side of Yashasvi Jaiswal 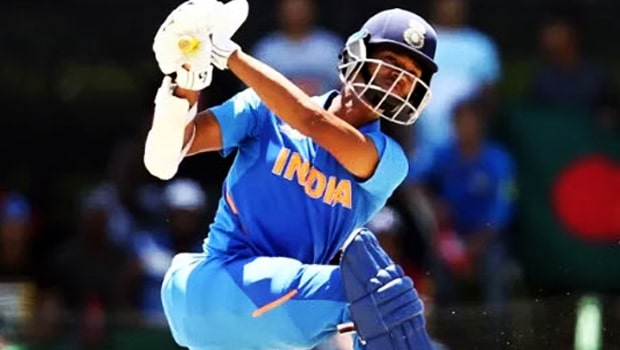 Yashasvi Jaiswal had a terrific outing with the bat in the U-19 World Cup. He ended up as the top run-getter of the tournament with 400 runs to his name at a mammoth average of 133.33.

These runs included 50+ scores in all but one innings which came against Japan U19 as they were chasing a paltry target of 42 runs. Not only that, he had scored a century and played an important knock of 88 in the semifinals and finals respectively as well.

The player who had the second most runs in the tournament stood with a distant tally of 286 runs to his name. So, there was a wide gap in quality as to how Jaiswal performed as a batsman as compared to others. India couldn’t go on to win the tournament as a spirited Bangladesh side beat them in the finals but Jaiswal was deservedly adjudged the Player-of-the-tournament as well.

Although his batting was the primary skill with which he shone in the tournament, there is one side of him which isn’t appreciated as much or has been underrated for quite a long time. And that is his bowling.

The player of the tournament, Yashasvi Jaiswal.

What an outstanding prospect he is, he's been a thrill to watch all competition.#U19CWC | #INDvBAN | #FutureStars pic.twitter.com/EObOLZUQA1

The 18-year-old picked up a total of three wickets in the tournament at an excellent economy rate and fabulous strike-rate of 4.88 and 18.0 respectively. And all three of these wickets broke big partnerships in crucial matches.

His first scalp came in the group stage against Sri Lanka U-19 when he picked up the wicket of Ravindu Rasantha to break his 87-run stand for the second wicket with Kamil Mishara. His next two scalps were of far greater significance. One of it was Haider Ali’s wicket which broke a 62-run stand in the semifinal against Pakistan and another was Parvez Hossain Emon’s wicket in the final against Bangladesh which broke a crucial 41-run stand for the eighth wicket. It was his only wicket which didn’t come in a winning cause in this tournament but his effort with the ball has been worth praising.

Whenever the Indian bowlers struggled to break a partnership, the skipper Priyam Garg always turned to Jaiswal’s Golden-Arm which delivered every single time. While his performance with the bat drew all the attention, Jaiswal’s bowling deserves an equal applause if not more.