Home » Cricket » Ind vs Eng 2021: Bhuvneshwar Kumar is one of the best in the world right now in white-ball cricket – Deep Dasgupta

Ind vs Eng 2021: Bhuvneshwar Kumar is one of the best in the world right now in white-ball cricket – Deep Dasgupta 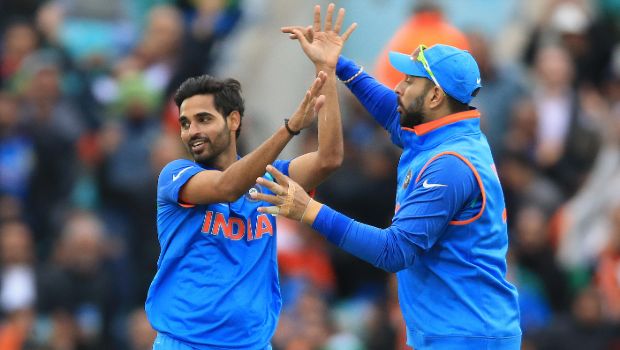 Former Indian wicket-keeper batsman Deep Dasgupta has rated Bhuvneshwar Kumar as one of the best in the world right now in the white-ball format.

Kumar was sidelined from action after he suffered a hamstring injury while playing for Sunrisers Hyderabad in the Indian Premier League 2020.

However, he was able to make a solid comeback as he scalped four wickets in the five T20Is against England and bowled at a parsimonious economy rate of 6.39, which was the best for any bowler in the series. Kumar’s best bowling performance came in the deciding T20I as he returned with of 2-15 in his four overs in a high-scoring game when all the other bowlers took a hammering.

Furthermore, Bhuvneshwar Kumar took two wickets in his nine-over spell in the first ODI against England on Tuesday. When all other bowlers once again took a beating, Bhuvneshwar conceded only 13 runs in his first spell of four overs. Thus, the Indian pack leader in the white-ball format has made a resounding comeback.

“Bhuvneshwar is not someone who will bowl at 145kph. If you look at him, he comes across as average. But he is not. He is one of the best in the world right now in white-ball cricket,” Dasgupta said while talking to Sports Today.

Meanwhile, Kumar has got great ability to move the ball both ways and he is always a handful in the powerplay overs. Moreover, the fast bowler from Uttar Pradesh is deadly accurate in the death overs and has the variations under his belt to keep the opposition batsmen in check.

“Bhuvneshwar Kumar with the ball swinging is a big positive. We don’t talk enough, we take him for granted. It’s a big positive, him coming out of his injury and bowling as well as he did before, that’s a huge positive.”

Dasgupta added that it is very rare to note a bowler is equally good on both ends of the innings. Bhuvneshwar can swing the new ball and then he can bowl accurately in the death overs. Thus, he is a complete package as he bowls the difficult overs for the team.

“It’s very rare that somebody is good with the old ball and the new ball. He is a proper banker. He bowls all the tough overs. His biggest asset is he is so calm under pressure. He reads the opposition very well, he reads the game situation well. He is one of the top bowlers in the world,” Dasgupta added.

The second ODI between India and England will take place on Friday.