Home » Cricket » Ind vs Eng 2021: Bhuvneshwar Kumar is the most skillful white-ball seam bowler in the world – Michael Vaughan

Ind vs Eng 2021: Bhuvneshwar Kumar is the most skillful white-ball seam bowler in the world – Michael Vaughan 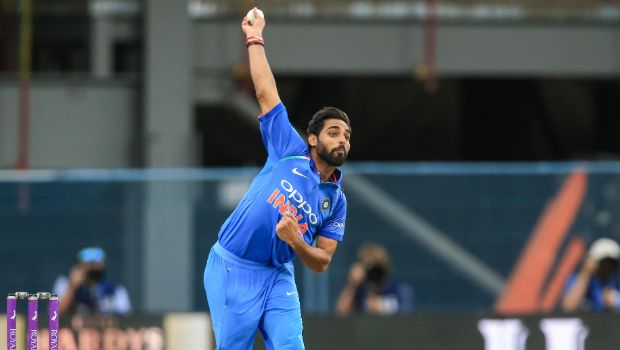 Former English captain Michael Vaughan has heaped praise on India’s pack leader Bhuvneshwar Kumar, who has made a resounding comeback after recuperating from injury.

When all the Indian bowlers took a hammering in the first 15 overs from England openers – Jonny Bairstow and Jason Roy – it was Bhuvneshwar Kumar who was the exception.

The right-arm fast bowler, who is known to swing the ball both ways, conceded only 13 runs in the first spell of four overs. Bairstow and Roy smashed 89 runs in the first 10 overs as Prasidh Krishna, Krunal Pandya, and Shardul Thakur took a beating.

Prasidh Krishna and Shardul Thakur helped India bounce back in the contest after regular strikes as they took seven wickets between them. Bhuvneshwar Kumar then accounted for Moeen Ali as he generated extra bounce from the surface and then dismissed Adil Rashid. Kumar to return with impressive figures of 9-1-30-2 as he bowled at the top of his game.

Vaughan took to Twitter to heap praise on Bhuvneshwar Kumar. The post read as, “Of all the skill on the show today @BhuviOfficial has been the best … He has to be the most skillful white-ball seam bowler in the world … #INDvENG.”

Meanwhile, Bhuvneshwar Kumar was also at his best in the recently concluded five-match T20I series against England. The fast bowler from Uttar Pradesh came up with a sublime performance in the final T20 as he scalped 2-16 in his four-overs quota in a high-scoring game. Kumar took a total of four wickets in the series and conceded his runs at a parsimonious economy rate of 6.39, which was the best for any bowler in the series.

Thus, he played a crucial role in India’s 3-2 series win against England. Kumar was ruled out of action due to a hamstring injury while playing for Sunrisers Hyderabad in the Indian Premier League 2020 and it was crucial for him to make a solid comeback as he has been troubled by a spate of injuries in the recent past.