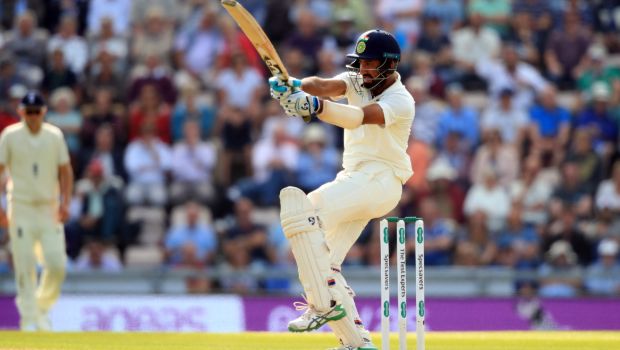 Former Indian captain Sunil Gavaskar reckons that Cheteshwar Pujara’s early dismissal on the final day of the first Test match against England was the biggest setback for the Indian team.

Pujara is the most solid Indian batsman and his early dismissal had put the team on the backfoot.

The right-hander was dismissed by Jack Leach in the first half-hour of the play when the left-arm orthodox spinner Jack Leach produced the outside edge of the bat and Ben Stokes took a good catch at first slip.

Pujara has the best defensive skills among all the Indian batsman and he has the skills to bat for a long period of time. In fact, the right-hander from Saurashtra had also played a key role in India’s successful run-chase at the Gabba when he faced 211 balls to score 56 runs.

Thus, Pujara had held one end up and didn’t allow wickets to tumble from his end. Furthermore, Pujara had taken blows to his body but he showed all the resistance.

Gavaskar stated that he didn’t expect the Indian team to lose by such a massive margin after savouring success in Australia.

“Definitely not, because of the stubbornness and heart the Indian team had shown in the Sydney Test, it seemed even if they lose they will take the match to the last few overs. Cheteshwar Pujara’s early dismissal was the biggest setback for India as he was dismissed in the first half an hour itself,” said Gavaskar while talking to Aaj Tak.

“He has the ability to keep the team together and the way he bats, the bowlers have to think what extra they need to do and because of that tension they are not able to bowl properly to the batsmen at the other end,” added Sunil Gavaskar.

Gavaskar added that the hosts were not able to get any kind of partnership going after Pujara’s dismissal and Virat Kohli was the solitary batsman who showed a bit of resistance.

England dominated the first session on the final day as they took five wickets for 105 runs and thus it was almost impossible for the Indian team to save the Test match on a difficult Chennai pitch.

“So, when he got out early it was necessary that there was a good partnership but that did not happen because after that Shubman Gill got out after a few runs and Ajinkya Rahane also got out in the same over. If half the team is back in the pavilion at lunch-time, with only 110 runs on the board, it is difficult to save the match,” pointed out Gavaskar.

India was not at their best in the first Test match and they will look to bounce back in the second Test match, which will be played at the same venue of MA Chidambaram Stadium, Chennai from February 13.