Home » Cricket » Ind vs Eng 2021: Credit goes to my seniors who told me to express myself – Ishan Kishan

Ind vs Eng 2021: Credit goes to my seniors who told me to express myself – Ishan Kishan 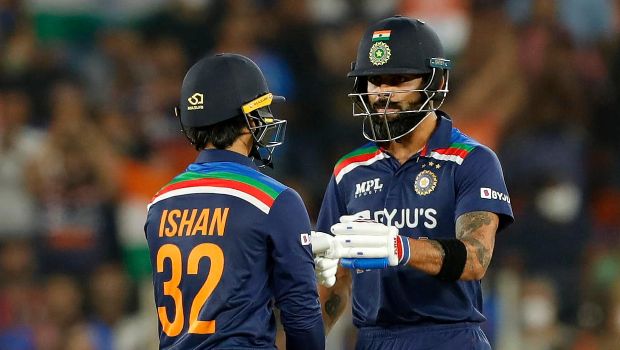 India’s rookie batsman Ishan Kishan made his T20I debut in the second match of the series against England at the Narendra Modi Stadium, Ahmedabad on Sunday.

Kishan got off to a dream start as he scored a boundary on the first ball he faced against Jofra Archer. The left-hander was able to hit the ground running and took the attack against the England bowlers.

The southpaw got a shot in the arm as he was timing the ball to perfection. Furthermore, Kishan had the rub of the green on his side as he was dropped by England all-rounder Ben Stokes when he was on 40 runs. The youngster from Jharkhand completed his fifty in 28 balls as he batted at the top of his game.

Kishan gave credit to his seniors as well as coaches, who gave him the freedom to express himself in the middle. Kishan scored 56 from 32 balls with the help of five fours and four sixes and helped his team chase down 165 runs. The left-hander added 94 runs with Virat Kohli in only 54 balls and laid the foundation of the run-chase. Thus, he was awarded the Player of the Match award.

Kishan said in the post-match presentation, “Credit goes to my seniors who told me to go and express myself. It’s not easy to come and play your first game against a quality side. Mumbai Indians helped me a lot and I want to continue the momentum. Wanted to finish the game and I knew there is a senior player batting superbly at the other end. I was disappointed with the fact that I didn’t finish the game. The shot in which I smashed Tom for a six off his first ball, that was special. I don’t know if I’m gonna get this feeling again (on making my debut for India), but really proud and happy and I want to thank all my coaches, seniors, and everyone who helped me get here. Now it’s my time to show them what I’ve got. I had a lot of hunger in me for this innings”.

Kishan revealed that his coach’s father breathed his last a few days ago and he wants to dedicate this match-winning knock to him.

Ishan added, “My coach’s Dad passed away a few days back and this innings was for him. I wanted to prove myself because he said you have to score at least fifty for my Dad. So I want to dedicate this award to him”.

Kishan was able to grab his chance with both hands as he given the opening responsibility by the team management. The southpaw showed no signs of nervousness as he played at the top of his game and delivered for the team in his first match.

The left-hander will look to continue the good show in the coming matches against England and seal his place in the side for the T20 World Cup. The third T20I will take place at the same venue on Tuesday.