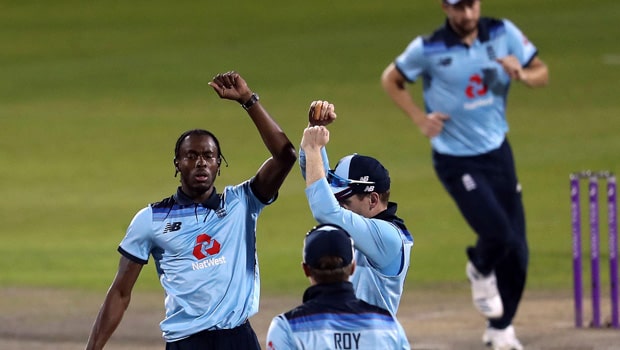 England and Wales Cricket Board have announced the 14-man squad for the three-match ODI series against India. England’s gun fast bowler Jofra Archer has been ruled out of the series due to an elbow injury. Archer had missed two Test matches due to the same injury and he will now travel back to the UK.

Archer will be assessed by England’s medical team and the call on his selection will be taken accordingly after monitoring him. In fact, it is also reported that Archer might miss the early phase of the Indian Premier League for Rajasthan Royals.

On the other hand, England’s Test skipper Joe Root will also miss the ODI series due to quarantine restrictions. Players like Reece Topley, Liam Livingstone, and Matt Parkinson have been added to the squad.

Meanwhile, Jake Ball, Chris Jordan, and Dawid Malan will travel to Pune as backup players for the side.

“Jofra Archer is returning to the UK for further management and investigation of his right elbow injury.

“Archer’s elbow issue has deteriorated over the course of the Twenty20 International series and made it increasingly challenging for him to maintain performance levels. He has been deemed unfit for selection for the ODI series that features matches on 23, 26, and 28 March.

“The ECB medical team will assess the player and, together with Jofra, develop a treatment plan and a return-to-play schedule in due course. As a consequence, Jofra will miss the start of this year’s Indian Premier League,” an ECB release said.

Meanwhile, England lost the three-match T20I series against India by 3-2 and they will look to make a roaring comeback in the ODI series. The first ODI will take place at the Maharashtra Cricket Association Stadium, Pune behind closed doors on 23th March.