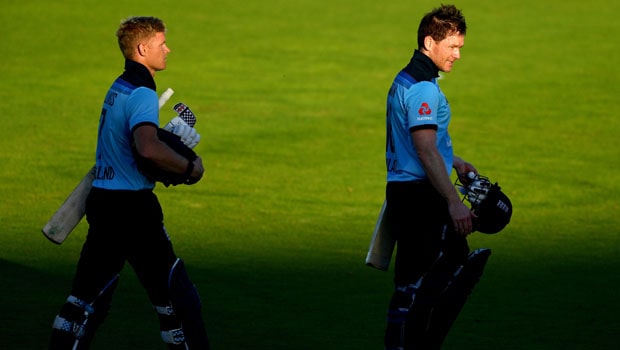 England has suffered a double injury blow as their captain Eoin Morgan and middle-order batsman Sam Billings will be doubtful for the second ODI against India on Friday. Morgan split the webbing between his right thumb and index finger while fielding as he got four stitches.

Morgan was able to bat despite his injury and scored 22 runs. In fact, the left-hander also had the rub of the green on his side as he was dropped by Virat Kohli in the slips on the first ball he faced against Prasidh Krishna. However, the southpaw couldn’t make use of his second life.

On the other hand, Sam Billings, who was playing his first match of the tour, injured his collarbone when he landed awkwardly on his shoulder as he dived to stop a boundary. Billings’ was writhing in pain but came out to bat during the run-chase. The right-hander could only score 18 runs and he was dismissed by debutant Prasidh Krishna.

Morgan revealed that both of them will require some time to recover from their respective injuries.

“We’re going to wait for 48 hours and see how it is… gives as much time as needed to hopefully be available for Friday,” Morgan said at the post-match interaction.

Morgan added that he is not going to be 100% for the second ODI. Thus, it will interesting to note if he will play the second ODI. If he decides to rest, Jos Buttler, the team’s vice-captain, will lead in his captain’s absence.

“I haven’t spoken with Sam about his batting so I don’t know in his instance… In mine, it’s never going to be at 100 percent but it’s not that I can’t hold a bat,” Morgan said.

Morgan noted that it will be a good opportunity for the young players if he and Sam Billings will need to sit out due to injuries.

“ODI cricket has been the vehicle to grow our squad and try and improve beyond our best XI on the field so there will be opportunities for guys coming in,” Morgan said.

England will aim to bounce back in the series and the second game will be a must-win for them.