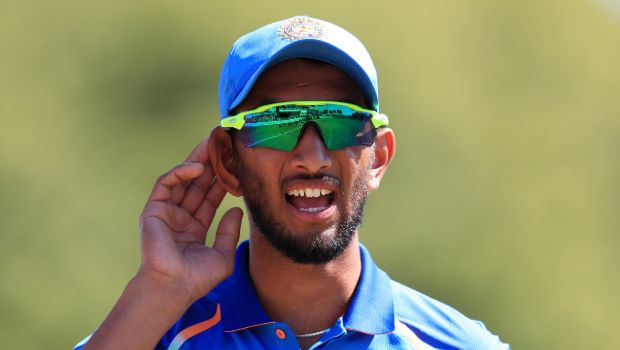 McGrath, who was known for his accurate line and length during his halcyon days, helped Krishna in sharpening his skills at the MRF Academy at Chennai in 2017.

Krishna has come a long way since then and made an impressive debut for the national team in the first ODI against England at the Maharashtra Cricket Association Stadium, Pune on Tuesday.

The lanky fast bowler took a hammering in his opening spell as he was taken for 37 runs in his first three overs, including a 22-run over in which he took a beating from Jonny Bairstow. However, Krishna was able to turn the tables in the second and third spell.

The fast bowler from Karnataka provided the crucial breakthrough of Jason Roy to break the opening alliance of 135 runs, which was taking the game away from India. Krishna then also dismissed Ben Stokes, who couldn’t get going.

Subsequently, he accounted for Sam Billings and Tom Curran in his third spell. Thus, he returned with figures of 5.1-1-17-4 in his second and third spell after going for plenty in his opening spell. Krishna finished the match with figures of 8.1-1-54-4 and thus recorded the best bowling figures by an Indian bowler on debut.

Meanwhile, Krishna revealed that McGrath always spoke of being consistent.

Prasidh Krishna said while talking to Kolkata Knight Riders, “The difference he made was to bring in that aura of calmness, and also he was very specific about the line and length with respect to different pitches. He always spoke of being consistent.”

Krishna added that the first thing he picked from Glenn McGrath was to remain in the present.

“The first thing I picked from him (McGrath) was to remain in the present under all circumstances as it is the most important aspect for a bowler when you are playing a game,” concluded Prasidh Krishna.

Krishna had a dream start to his international career and he impressed with his pace and bounce on his debut. The tall fast bowler had also scalped 14 wickets in the Vijay Hazare Trophy and thus got a maiden ODI call-up to the squad.

The second ODI between India and England will take place at the same venue of Pune on Friday.