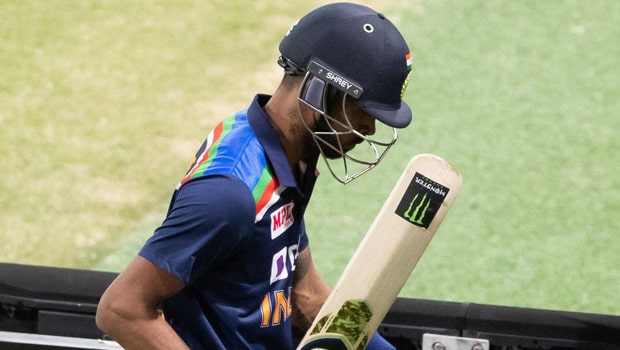 Former Indian opener and now commentator Aakash Chopra feels the team is wasting Hardik Pandya’s power-hitting abilities if he is batting at number seven in the T20I format. Pandya has the skills to hit the ground running and he has done a fine job in adding the finishing touches for the team.

However, it is crucial for the team to make the most of Pandya’s pyrotechnics, and batting him in the lower order doesn’t make much sense. Pandya batted at number six in the first T20I against England whereas he batted at number seven in the third and fourth T20I. However, he was promoted to number four in the final T20I on Saturday after the team got off to a good start.

Pandya smashed 39 runs from 17 balls with the help of three fours and two sixes as he played a crucial role in taking the team to an above-par total of 224 runs.

Meanwhile, Pandya also had a great limited over series against Australia as he had scored 210 runs in the three ODI matches whereas he scored 78 runs in the T20I series.

“It is a very simple thing. If you give the opportunity, then someone will shine. The way he was promoted in the batting order, I think this should happen every time. He was batting too low down, it is an injustice if you keep Hardik Pandya at No.7,” said Aakash Chopra while talking to Star Sports.

Chopra believes Pandya should walk out to bat if a wicket falls in the 10-12 overs. Pandya has the skills to up the ante of the scoring rate with his blitzkrieg batting.

“Whenever a wicket falls after 10-12 overs, he should be the guy who should come out to bat. He has shown it in Australia and proved here again that there is no better striker than him in India and he is one of the best in the world as well. What is the use of the sharpness of a sword if you keep it in the scabbard,” added Chopra.

Hardik Pandya has the skills to turn the match on its head and he should be given his chance in the middle-order depending on the match situation. Pandya will now be seen in action in the ODI series against England.