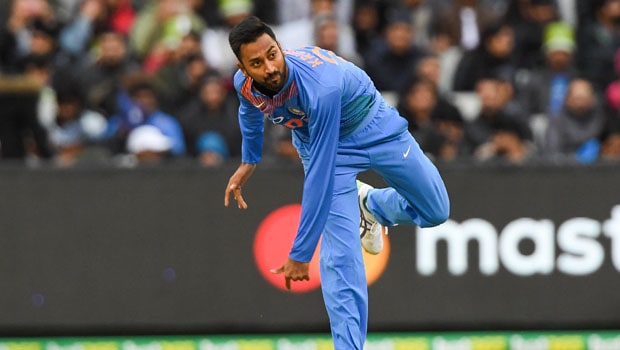 Indian legend Sunil Gavaskar has heaped praise on all-rounder Krunal Pandya for his blistering batting on his debut in the first ODI against England at the Maharashtra Cricket Association Stadium, Pune on Tuesday. The senior Pandya joined forces with KL Rahul when India was 205-5 after 40.3 overs.

Thus, it looked like that the team will even struggle to reach 280 at that stage as KL Rahul was still yet to get off the blocks. However, Krunal Pandya hared off as soon as he came to the crease and scored 18 runs off the first nine deliveries. The left-hander took the attack against the English bowlers and batted fearlessly.

Pandya was high on confidence after having a sublime Vijay Hazare Trophy and he was able to hit the ground running. The southpaw raced to a 26-ball fifty, which is the fastest-ever for any debutant in the ODI format.

Thus, Krunal Pandya took the pressure off KL Rahul’s shoulder, who also bounce back to form. Rahul took his time in the initial phase but ended his innings strongly as he smashed 62 runs from 43 balls. In fact, KL Rahul had scored 15 runs from the first 22 balls but then changed gears to smash 47 runs from the next 21 balls he faced.

The right and left-hand batting combination smashed 112 runs off the last 57 balls to take India to a fighting score of 317, which proved to be enough in the end. Pandya scored 58 from 31 balls with the help of seven fours and two sixes as he scored his runs at a whirlwind strike rate of 187.10.

“With KL Rahul not quite hitting at that particular point, somebody had to take the initiative. Krunal took the initiative and eased it for KL Rahul. That’s what team spirit is all about – easing the pressure off your teammate. That’s why his batting was so impressive,” Sunil Gavaskar said while talking to Star Sports.

KL Rahul also got back into form as he had mustered only 15 runs in the four T20Is against England. Thus, Rahul’s return to form was another big positive for the Indian team.

On the other hand, Krunal Pandya scalped one wicket and conceded 59 runs in his quota of 10 overs, to have a perfect debut. The second ODI will take place at the same venue in Pune on Friday.