Home » Cricket » Ind vs Eng 2021: Maybe they will bring Kuldeep Yadav for the next Test – Sunil Gavaskar

Ind vs Eng 2021: Maybe they will bring Kuldeep Yadav for the next Test – Sunil Gavaskar 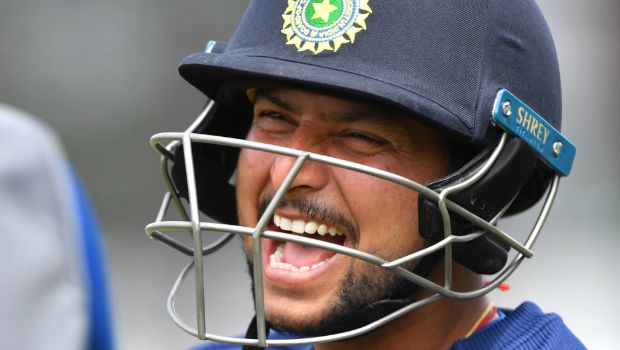 Indian legend Sunil Gavaskar believes the hosts may bring Kuldeep Yadav for the next Test match against England.

The Virat Kohli-led team lost the first Test match by a massive margin of 227 runs and they will look to bounce back in the second match. Gavaskar believes adding Kuldeep Yadav will bring variety to the Indian spin bowling attack.

Yadav has a plethora of variations under his belt and he has the skills to breathe down the neck of the opposition batsmen. Kuldeep has produced decent numbers while playing in the Indian conditions as he has scalped 14 wickets in the three-Test matches at an average of 24.29.

Sunil Gavaskar said while speaking to Star Sports, “Maybe in the hindsight, they could have included Kuldeep Yadav for a bit of variety. Because you have two off-spinners Washington Sundar and Ravichandran Ashwin, Maybe they will bring Kuldeep Yadav for the next Test in place of Nadeem or Washington Sundar, whoever it is. But they need to look at dismissing England for lesser than what they scored this around.”

On the other hand, Virat Kohli revealed that Kuldeep Yadav will be in the team’s schemes in the home season. Kohli added that Kuldeep has drastically improved his skills and he is much fitter than he was before.

“Someone like Kuldeep hasn’t had a lot of game time but now that the home season starts, he will in the scheme of things, he will be in the team plans, but to keep guys motivated you need to give them goals,” said Virat Kohli.

“Kuldeep is someone who has got a lot of skill. He understands there were areas in his game that he had to work on, which he has worked in beautifully in Australia. I see him, fitter, I see his bowling improved much more than it was before,” added the Indian captain.

The second Test match begins on February 13 at the same venue of MA Chidambaram Stadium, Chennai.