Home » Cricket » Ind vs Eng 2021: Not surprised by what Prasidh Krishna did in the first ODI – KL Rahul

Ind vs Eng 2021: Not surprised by what Prasidh Krishna did in the first ODI – KL Rahul 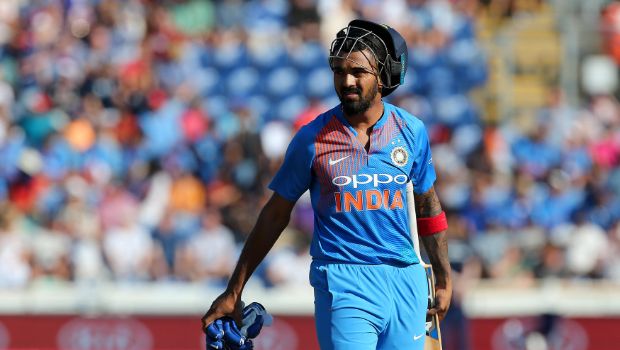 India’s wicket-keeper batsman KL Rahul has heaped praise on his Karnataka teammate Prasidh Krishna and he is not at all surprised by what the fast bowler achieved in his debut ODI.

In fact, Rahul expressed confidence that he knew the next player coming out of Karnataka will be the lanky fast bowler.

Krishna took a hammering in his opening spell as he was taken for 37 runs in his first three overs, including a 22-run over in which he took a beating from Jonny Bairstow. However, Krishna was able to turn the tables in the second and third spell.

The fast bowler from Karnataka provided the crucial breakthrough of Jason Roy to break the opening alliance of 135 runs, which was taking the game away from India. Krishna then also dismissed Ben Stokes, who couldn’t get going.

Subsequently, he accounted for Sam Billings and Tom Curran later in the innings. Thus, he returned with figures of 5.1-1-17-4 in his second and third spell after going for plenty in his opening spell.

Krishna finished the match with figures of 8.1-1-54-4 and thus recorded the best bowling figures by an Indian bowler on debut. The fast bowler impressed with his ability to get extra bounce from the surface and also clocked above 140 km/h consistently.

“Look, quite honestly, I am not surprised by what he [Prasidh Krishna] did in yesterday’s match. I was always very confident that the next player that is going to come out of Karnataka, is going to be Prasidh. We weren’t of the same batch, but I have watched him play a lot of junior cricket and in the nets, he is somebody who will catch your eye,” said KL Rahul while talking in the press conference.

On the other hand, Krishna was trying to have a chat with England opener Jonny Bairstow after he grew in confidence in his second spell by taking two wickets. Rahul added that he loves this aspect of his game as the pacer enjoys his cricket.

“We saw in the last game, he was trying to have a word or two with the batsmen and he enjoys being in a contest and that’s something I love about him. I’m so happy to see that he’s carrying on the same thing and he wasn’t overwhelmed by the place he is in. I am sure there will be a lot of nerves but the way he came back after the first three overs, got those crucial wickets, so these are the qualities that a lot of us are impressed with what he’s done,” KL Rahul continued in the virtual press conference.

Meanwhile, Rahul also got back into form as he scored 62 from 43 balls in the first ODI. The second One-Dayer will be played at the same venue in Pune on Friday.